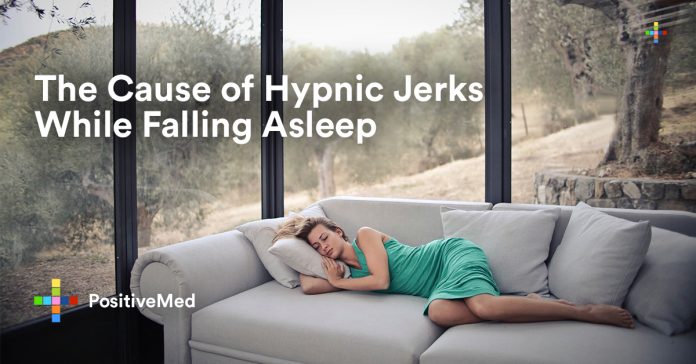 Picture this: you are comfortable and safe in your bed, relaxing after a long day and ready for a good night’s sleep. Just as you are drifting off, you are rudely awakened by a fierce jolt to your body. Sound’s familiar? Scientists estimate that 70% of the population experiences these hypnic jerks at some point in their life.

What is a hypnic jerk?

Between the time you get in bed and when you actually fall asleep, you are in a stage called the “hypnotic stage of consciousness.” The time between when you are awake and asleep is when people are known to have wake induced lucid dreams, but also a time when the brain is susceptible to being jerked back to full consciousness by something small, like muscle jerks.

This is what is happening during a hypnic jerk. The brain is being notified to wake up quickly because something is happening, such as a muscle jerk. The jerks that are experienced during this time can resemble a shock, a flinch, or a quick and intense reaction, depending on the person’s instincts and innate reaction.

It is hard to determine the exact causes and reasons behind hypnagogic jerks. Although none is confirmed, there are several theories as to what causes these sleep disturbances.

There may be medical causes to hypnic jerks such as restless leg syndrome or brain lesions. Because restless legs syndrome is a nervous system disorder, causing an urge to move the legs, this can result in muscle jerks ending in a hypnic jerk. Brain lesions may also cause hypnic jerks, as they alter the activity in the brain and open it up to the possibility of malfunctioning.

RELATED ARTICLE: Feeling Urge to Move Your Legs at Night Could Be Very Serious…Don’t Ignore It!

Someone who is more stressed than another person or experiencing more anxiety is more likely to experience hypnic jerks. Some believe that hypnic jerks are a defense mechanism of the brain to tell the body to not sleep. This may be common for people who have a lot on their mind and their brain is making sure they really want to shut down and go to sleep. Without this jerk, the body would drift off to sleep without having the option to remain awake. When these hypnic jerks occur, one may decide to abort sleep.

Another possibility is that during the transition from being awake to being asleep, the brain shuts down to prepare for the rapid-eye movement stage of sleep. While preparing, the brain may discontinue the activation of one’s control over their limbs, leading to sleep paralysis during the REM stage. Sleep paralysis occurs when the limbs become paralyzed temporarily in order to prevent people from physically acting out their dreams.

Hypnic jerks may occur while the brain is preparing the body during this deactivation period. This may be a result of abnormal activity in the brain, or as a natural side effect of the transition.

Sleep disorders, such as night terrors, jet lag, and narcolepsy, result in abnormal activity in the brain, including neurotransmitter changes, which increases the risk for a hypnic jerk. If a hypnic jerk is the secondary effect of a sleeping disorder, they are typically paired with hallucination and paralysis.

Hypnic jerks are certainly startling and not a great way to start a long slumber. While there may be several different causes of these jerks that can have other detrimental side effects, the hypnic jerks themselves pose no health risk. If possible, try to calm yourself a bit and work on falling back to sleep.