PositiveMed The Positive Side of Medicine
Home health cancer Throat Cancer Story: “He First Said He Wanted to Get Married” 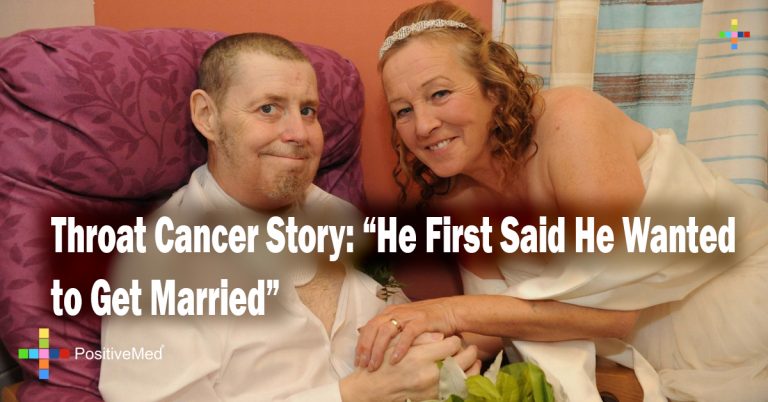 Throat Cancer Story: “He First Said He Wanted to Get Married”

A father of four in England brought tears to people’s eyes after his story made it on the local dailies in Birmingham. Terrence Reeves now 57 years old had one dying wish, after doctors diagnosed him with throat cancer, and told him he only had a short time left in his life. He decided to marry his life partner, 55-year-old, Josie Flynn, while still in the hospital in Erdington.

The diagnosis came late last year in September as they were still mourning the death of Mrs. Reeve’s brother. He began treatment immediately, undergoing three months of radiotherapy and chemotherapy. All was okay till Reeves was admitted to John Taylor Hospice about three weeks ago and given the sad news on his life line. At that point, after looking at his life with his wife of 38 years, he decided it was the right time to make it official.

Mrs. Reeves found her husband’s action romantic after all these years. Their entire family was excited and came through, making the ceremony happen on short notice. The ceremony was very intimate, with only their four children and their grandchildren. They all felt it was a celebration of the remarkable marriage their parents had for all those years. They all watched in tears of joy as Reeves wrote down his vows to his wife during the ceremony. He cannot talk due to the tracheotomy tube that helps him to breath.

After 38 years of a wonderful marriage, the cruel hand of death will take away a father and husband through throat cancer. It is cancer of the voice box, chords and other parts of the throat such as tonsils and pharynx. There are two types of throat cancer based on where the mutation of cells occurs. One can have pharyngeal cancer that occurs in the pharynx or Laryngeal cancer in the larynx.

Throat cancer can go for a long time without detection. Most of the symptoms associated with the condition mimic those of other throat problems, such as voice loss among others. Always see a doctor if you often lose your voice after throat infections. If the following symptoms occur at the same time, it could be indicative of throat cancer.
• Voice become coarse
• Sharp pain swallowing
• Sore throat
• Weight loss
• Feeling of a productive cough, always unproductive
• A persistent cough with blood
• Swollen lymph nodes
• Swollen lymph nodes in the neck.

Symptoms such as pain swallowing food can easily be confused with tonsillitis. What can be worse is, when doctors check and see the swellings, they assume in most cases it is the tonsils and not a deeper problem such as the swelling of the lymph nodes. If you experience any of the symptoms, proper diagnosis is necessary. The doctors can do a laryngoscopy to get a closer look at your throat. The process involves inserting a long flexible tube down the throat with a light and mirror to examine the throat.

RELATED ARTICLE: HE WARNS PEOPLE ABOUT THE REASON OF WHY HIS FACE WAS EATEN ALIVE

In the case of any abnormal growths, the doctor will take a tissue sample and carry out a biopsy to confirm whether it is throat cancer. Once there is confirmation a patient has throat cancer, doctors conduct several tests to find out the cancer stage. They can do a CT scan or MRI. The two tests provide better imaging of the cancer progression.

• Stage 1- the cancer is limited to the throat and no other tissue beyond.
• Stage 2-the tumor is larger than 7cm but still around the throat.
• Stage 3- cancer has grown and spread to surrounding tissue and organs.
• Stage 4-the cancer has spread to the lymph nodes and other distant organs such as the olfactory system.

Throat cancer treatment
Doctors can only start treatment once they identify the disease stage. It goes without saying it is easier to treat the first two stages. Depending on the extent of the spread, one or two of the following treatments will be used.

• Surgery
Doctors use surgery to remove a small tumor in the throat that has not spread to other body parts.

• Radiation
Radiation uses high-energy rays to destroy malignant cancer cells in the throat. It can be done after surgery to kill any cells that may have remained.

• Chemotherapy
Chemotherapy uses chemical drugs to kill and slow the growth of malignant cells. It is administered together with radiation therapy for effective treatment.

Avoiding habits such as smoking is one way of reducing the risk factor associated with throat cancer. Always use proper clothing protection and masks when working in environments exposing you to metals such as asbestos.