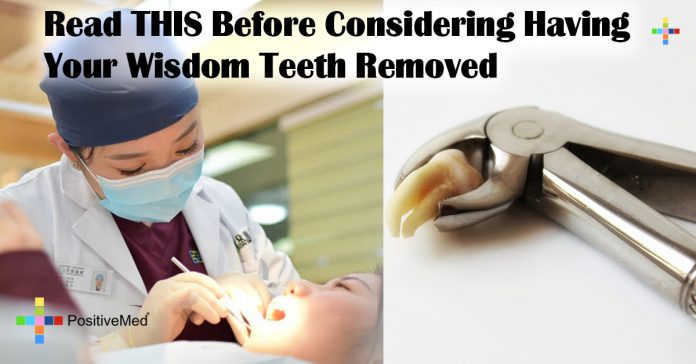 Read THIS Before Considering Having Your Wisdom Teeth Removed!Essential Reason to Keep Wisdom Teeth

Wisdom teeth are the third and final set of molars we get, usually in our late teens or early 20s. They’re called wisdom teeth because they come in when we’re around college age. Most people wind up having their wisdom teeth removed, because many dentists say they cause problems and we’re better off without them. Why would nature design useless teeth? It wouldn’t, according to some studies, which say that wisdom teeth are useful and rarely need to be extracted. The British Medical Journal reported in 2004 after studying thousands of cases that the removal of wisdom teeth may end up doing more harm than good, and evidence gathered in the past 10 years points to the same conclusion.

The problems with wisdom teeth, according to many dentists, is that they often come in angled because they are the last teeth, so there sometimes isn’t room for them to fit in properly. While angled teeth could pose a problem, many dentists encourage their patients to have perfectly healthy wisdom teeth removed, with the usual reason being, “to prevent problems later.” The problem with this line of thinking is that if the wisdom teeth are fine now, there is no real reason to suspect that they will cause any problems later. Dentists sometimes say that it’s easier to have them removed when you’re younger, because healing time is easier and quicker at a younger age. This could be a scare tactic designed to persuade young people to have their healthy wisdom teeth removed.

The American Journal of Public Health has reported that 67% of wisdom teeth removals are unnecessary. A study authored by Dr. Jay Friedman concluded that wisdom tooth infection is rare and that it can usually be treated successfully with antibiotics. As for the risks associated with the extraction of wisdom teeth, the study indicates that in the United States as many as 11,000 people suffer permanent nerve damage after having wisdom teeth removed.

The dentists’ habit of encouraging wisdom teeth extraction could be motivated by greed, according to the editor of Natural News. He concedes that some dentists may truly be misinformed, believing what they’ve been taught; that wisdom teeth can harm you, but he encourages people to be wary of dentists who push for the removal of wisdom teeth by using scare tactics about future problems or future difficulties in surgery when you’re older.

Traditional Chinese medicine tells us that wisdom teeth are not simply harmless and okay to leave alone, but that they are an important part of our oral and overall health. This form of medicine recognizes the relationship between our teeth and our vital organs, endocrine glands and vertebrae. The wisdom teeth, in particular, are linked to the health and function of the pituitary gland and the small intestine.

Considering all of the evidence, if your dentist is encouraging you to have your wisdom teeth removed but there is currently nothing wrong with them, you may want to seek a second opinion, or do some research on your own. Dr. Friedman has compared the routine removal of wisdom teeth to the early 20th century practice of tonsillectomies “just in case” problems should arise later. This practice stopped when it was realized by medical science that precautionary surgery of this type was unwise. Today, even infected tonsils are often treated with medication rather than being removed as a first course of action. Wisdom teeth are deserving of the same respect as important parts of the human body, and not nuisances to be gotten rid of.