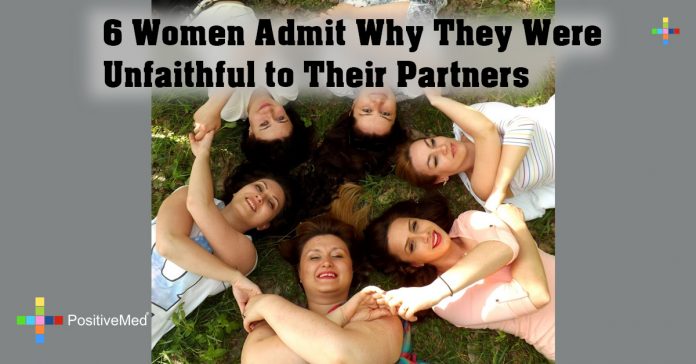 6 Women Admit Why They Were Unfaithful to Their Partners

While society tends to focus on men being unfaithful, we often forget that women cheat on their partners as well. However, women often stray for different reasons than men. Anthropologist Helen Fisher led a study by Rutgers University that found that men who were unfaithful to their wives believed that they had strong marriages, while women who cheated did not. This seems to indicate that women seek out new partners when they feel as if they are lacking a strong bond with their current partner. Six women recently admitted to cheating and explained why.

One woman stated that she was unfaithful because she did not feel appreciated by her husband. When she met another man, she said that he gave her a boost in confidence because he appreciated her efforts in that relationship. She eventually left her husband for the other man, and she says that she does not regret cheating. Psychologists report that women who feel as if they have been regulated to a role as housekeeper and/or nanny may be more apt to cheat in order to receive positive attention for who they are rather than the daily tasks they complete.

Another woman reported that she is unfaithful because her and her boyfriend are engaged in an open relationship. This means that they may engage in the physical act of love with other partners while remaining committed to each other. Recent studies have found that couples who are engaged in these sort of relationship describe their love lives as more exciting than those who remain faithful. This relationship requires a great deal of trust, of course. Both parties must be open to this situation and promise not to become emotionally committed to another person. Clinical psychologist Lisa Firestone reports that as long as both individuals stand by the rules they have set, these open relationships due stand a chance of working long-term.

RELATED ARTICLE: Attention Men! Here Is Why Some Women Leave The Men They Love

Yet another young woman focused on telling the story of how she was caught cheating and the relief she felt when she no longer had to hide the fact that she was unhappy in her relationship. Lying is unhealthy, and it is very taxing to the brain. Constant lying can affect a person’s physical health and can cause high blood pressure and difficulty in concentration.

Unable to Break Up With a Partner

Some women find it easier to cheat and get caught rather than go through the act of breaking up with someone. One woman admitted to cheating in an attempt to force her partner to break up with her because she felt too overwhelmed to break up with him. She felt as if he was unfaithful to her but could not prove it. When she met another man, she engaged in a close relationship with him because she no longer cared if her committed relationship was sucessful.

Unhappy with Physical act of Love

One woman cheated because she did not enjoy the physical act of closeness with her committed partner. It was not exciting to be with him, so she found excitement with another person. Women enjoy closeness as much as men do, and they also like the exhilarating feeling of meeting a new person. Mary Jo Rapni, a relationship expert, states that a mate who is suddenly more interested in closeness may actually be cheating with another person.

Insecurity is another reason that women may choose to stray. A young woman admits that she wanted to feel as if she was important. She didn’t feel good about herself unless a man was showing her attention. Robert Weiss, a clinical social worker and relationship expert, says that women with low self-esteem are vulnerable to cheating because they have to look outside of themselves for validation. He notes that reasons for this low self-esteem may stem form childhood abuse. They may also cheat because it helps them to feel powerful, or they may cheat because it makes them feel better about themselves. Women who are unfaithful because they are insecure may even be prone to troubles with $ex addiction.