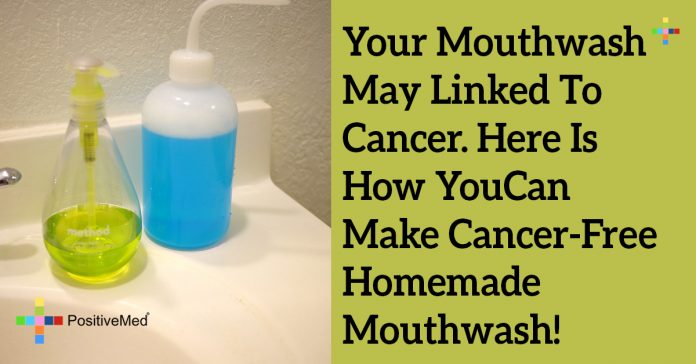 Your Mouthwash May Linked to Cancer. Here is How You Can Make Cancer-Free Homemade Mouthwash!

People generally don’t think twice about their mouthwash. Very few have suspected that it is in any way harmful to the body or that it could contain toxic ingredients. But it is becoming increasingly evident that store-bought chemical mouthwash brands may actually cause oral cancer.

A recent study conducted by the Leibniz Institute for Prevention Research showed that the alcohol contained in most formulations of mouthwash actually does appear to heighten the risk of oral cancer. While these findings are not conclusive, it has lead to increased scrutiny of mouthwash formulas. The findings have been appalling.

Most conventional mouthwashes contain lots of alcohol, some brands. The Dental Journal of Australia has confirmed that chemical mouthwash products containing alcohol can promote the developments of cancer in the mouth, tongue and throat.

Many mouthwash brands contain fluoride. Fluoride is good for fighting cavities but it is very bad for the body. This is why people have become very concerned with the amount of fluoride found in municipal tap water. Ingesting too much fluoride can lead to neurological issues and it is also a carcinogen.

The worst ingredient of all is formaldehyde. Formaldehyde is usually found in household cleaners and glue. It certainly is not meant to be ingested. The U.S. Environmental Protection Agency declared formaldehyde to be a “probable human carcinogen” and research has shown that long-term exposure to formaldehyde is associated with different types of cancer, including leukemia.

Many experts recommend that people make their own mouthwash at home. It is a relatively simple process that ensures that you know exactly what is – and isn’t – in your mouthwash.

To make your own mouthwash, you’ll need a container. Many people like to use mason jars, but any type of glass jar or bottle will do.

Here are the ingredients:

To mix it effectively, you will want to boil the water first and add the herbs to it. Let it sit for 20 minutes, then strain and bottle it.

Other popular ingredients include spearmint, goldenseal and raw honey.

The powder will settle at the bottom of the jar, so you should shake your mouthwash each time before using it. Swish a couple of teaspoons of your homemade mouthwash in your mouth and avoid swallowing when you gargle.

Homemade mouthwash is much, much cheaper than store-bought mouthwashes. Best of all, it doesn’t have any alcohol or toxic chemicals in it.

Conclusion: The connection between mouthwash and cancer is becoming increasingly evident. Making mouthwash at home is the only way to ensure that you really know what you are putting in your body.

Summary: It has come out that many store brand types of mouthwash contain toxic chemicals that may cause cancer. Many people are making their own mouthwash at home to stay healthy and to save money.