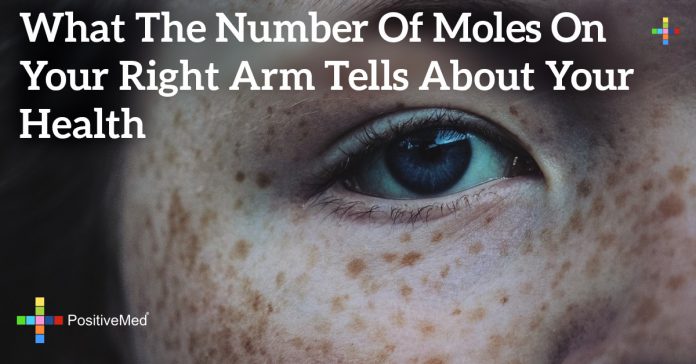 In most cases, normal number of moles on our body does not indicate any health hazard. However, multiple studies certify that a high number of moles on the body (over 100) mean the person have a great danger of developing cancer, mostly skin cancer. In the recent past, a better technique for assessing your risk of cancer was unveiled. It involves determining the number of naevi in the right arm to predict your risk of developing skin cancer (melanoma).

This technique has made it easier for general practitioners (GP) to assess the risk of cancer in a patient. They no longer have to do the traditional tests that involved examining the whole body. GPs need to focus on the right arm only and will tell you the answer. The arm is an easily accessible part of the body, and this means that more people at a risk of getting skin cancer will be identified early enough and be monitored. Dermatologists and general practitioners know that skin cancer increases with the number of naevi in the body. However, counting the total number of moles in the whole body is not only a tiresome procedure but also time-consuming.

What are moles?
They are tiny colored spots, mostly brownish, found on the skin. They consist of cells known as melanocytes, which are responsible for producing the color pigment on the skin. They are bumpy or flat, coarse or smooth,and some naevi have hair growing from them. They are not linked to direct sunlight. However, excess exposure to sunlight increases the risk of developing skin cancer as it can cause a naevus to become malignant.

RELATED ARTICLE: SHE HEALED HER MOTHER’S SKIN CANCER AT HOME IN 40 DAYS. HERE IS HOW SHE DID IT

The Department of genetic epidemiology and twin research at King’s College London carried out one of the studies which lasted for eight years. It had 3,594 Caucasian female twins.Wellcome Trust funded it. Qualified nurses from St Thomas Hospital, London did a naevus test from seventeen areas of the body in every individual. Additional factors such as the skin type, freckles, eye and hair color were also noted in the study. The results were further cross checked with a study that involved 400 men and women.

Why the right arm?

In the study, the naevi were taken from seventeen body parts such as the legs, arms, chest, back, etc. The results proved that the arms are the best indicators since they were the only parts with the greatest number of moles. The experts discovered that the number of moles on the right arm stood out to be the most predictive of the total number of moles in the entire body.

People with over seven naevi on the right hand had nine times the possibility of having more than fifty moles on the entire body. Those individuals with more than eleven moles were most likely to have over 100 moles. The study indicated that the part below the right elbow was the most predictive in the right arm.

Approximately 20% to 40% of melanoma arises from pre-existing moles. This implies that it is vital to identify what is normal and what is extraordinary on your skin. It is advisable to notify your doctor in case you discover any changes in the color, feel, shape, and size of a mole or a patch of the skin. Veronique Bataille, a study co-author, and consultant dermatologist advised patients with abnormal moles to visit a specialist as soon as they notice them.

The American Cancer Society stated that people with intense exposure to UV rays and those with a history of melanoma in their families are at a greater risk of skin cancer. The genetic composition of the moles should also be considered when identifying the number of moles. For instance, dysplastic nevi, which are unusual moles, show the existence of melanoma. They should be differentiated from other moles since they indicate a greater cancer risk. Researchers concluded that persons with a mole count of over eleven in the right arm had a greater risk of developing melanoma.
[/nextpage]