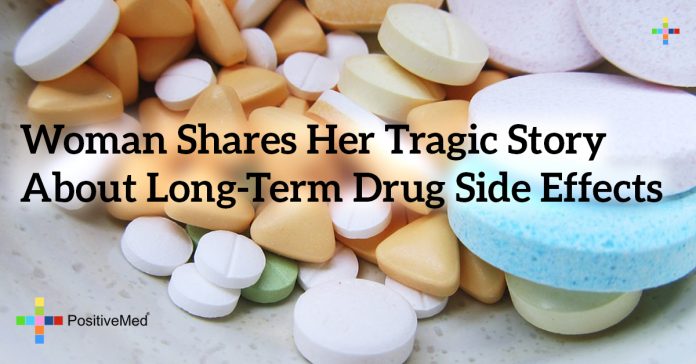 Woman Shares Her Tragic Story About Long-Term Drug Side Effects

Most people think that drugs are safe because they are tested extensively before they become available to patients. However, the lack of apparent negative side effects does not mean that they are not harmful, and many studies done to test experimental medications only last a few years. More and more people are becoming aware that certain drugs can have devastating consequences years after they are taken. To join the fight against incompetent medical testing and long term side effects, one woman shares her story of how her health has been drastically impacted from the long term side effects of something that was given to her mother before she was born.

Suzanne Robotti explains that her entire life has been changed because of a decision that her mother’s doctor made in 1957 while she was pregnant. Her mother was advised to take diethylstilbestrol (DES) which was the first form of synthetic estrogen ever created. This synthetic estrogen was created in the 1940s, and many doctors prescribed DES shots and pills to their patients because it supposedly supported healthy pregnancies.

DES was frequently prescribed to women who had suffered from previous miscarriages, because doctors at the time thought low estrogen levels could cause issues. Despite the fact that research in the American Journal of Obstetrics and Gynecology had shown that DES was not really useful, the doctor reassured Robotti’s mother that the supplements were not harmful and could potentially be beneficial. After a healthy pregnancy and childbirth, Robotti’s mother had no reason to doubt her doctor’s advice for years.

The first sign that DES exposure in utero could be dangerous occurred in the early 1970s. There was an outbreak of teenage girls being diagnosed with clear cell adenocarcinoma, a very rare type of cancer that affects the reproductive organs. The New England Journal of Medicine created a study that showed the abnormal cancer increase was linked to DES exposure 15 or 20 years beforehand.

Eventually, DES was pulled from the market because it was so unsafe. When Robotti’s mother learned about this, she wrote to her doctor, but he reassured her that he gave her stilbestrol, not DES. Sadly, stilbestrol is merely a brand name version of DES. In the next ten years, more medical research revealed that women whose mothers took DES while pregnant suffered from infertility and miscarriages. When Robotti started trying to conceive, she was greatly distraught to learn that she was infertile because of DES exposure.

Ultimately, these unlucky women who were exposed to DES as fetuses came to be called DES daughters. DES daughters like Robotti often have abnormal reproductive organs that make them infertile. They have a higher risk of getting breast cancer and other cancers, and these women also suffer from increased risks for cardiovascular disease and diabetes. DES sons who were exposed to the drug while in utero may not face such severe symptoms, but they do tend to have low testosterone and slightly increased testicular cancer risks. Currently, scientists are discovering that the children of the few DES daughters who have managed to give birth also are affected by milder versions of these same symptoms.

Countless mothers nationwide were devastated to learn that the medication prescribed by their doctors would end up harming their children and grandchildren’s lives. Together, these women formed DES Action USA, an organization that provides resources and help for people who have been exposed to DES. Many women are not even aware that they were exposed to DES in utero, so DES Action USA helps to raise awareness and inform women about why they may be suffering from infertility. Currently, Robotti is the executive director of DES Action USA, and she aims to raise awareness about how harmful long term side effects can be.

Robotti is also the president and founder of MedShadow Foundation, a nonprofit that focuses on researching and finding information about long term side effects of drugs. There are currently many commonly prescribed drugs that have never faced long term testing. For example, the stimulants frequently prescribed to children with ADHD have never been studied for over 425 days. Other drugs like aspirin and antidepressants are also constantly prescribed to people, yet no scientists have ever bothered to see what these drugs do years after a patient takes them. MedShadow tries to empower patients and encourage them to examine long term side effects of medications in the hopes of preventing further tragedies like the ones suffered by all the descendents of women who took DES.
[/nextpage]