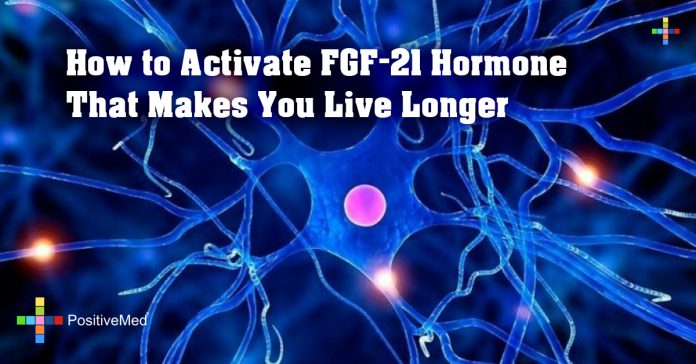 How to Activate FGF-21 Hormone That Makes You Live Longer

[nextpage title=”…”]
FGF-21 is a hormone produced in the liver and the pancreas that can help you live longer, lose weight, and improve your overall health. Its official name is Fibroblast Growth Factor-21.

Unfortunately, as we age, we produce lower levels of the T cells that are necessary for fighting disease. When the levels of FGF-21 are elevated in elderly patients, T cell production is increased. In 1934, researchers at Cornell noted that mice who were fed a low-calorie diet lived twice as long as mice who did not. This is because a diet such as this activtes the production of FGF-21.

RELATED ARTICLE:  How to Control 6 Important Hormones That Trigger Your Belly Fat Storage?

The FGF-21 hormone may be the key to successful weight loss, as it manages overall metabolism and glucose levels. In “From Feast to Famine,” researchers Potthoff, Kliewer, and Mangelsdorf reported that pharmacolic administration of FGF-21 reduced the total body weight of obese animals. Another study out of the University of Texas found that FGF-21 actaully melts adipose white fat. Once this hormone is produced in larger amounts, appetite is suppressed altogether.

Furthermore, studies have found that the FGF-21 hormone can protect the heart, and it may benefit those suffering from type 2 diabeties. In a study out of the Lilly Research Laboratories in Hamburg, Germany, researchers discovered that FGF-21 improved tolerance of glucose and stimulated the uptake of glucose. These same researchers also found that the hormone improved the conditions of mice affected by liver disease that had not beeen caused by alcohol. FGF-21 also lowers cholesterol levels.

While recent studies have focused on effects after the hormone has been administered through injection, there are some ways to activiate the hormone naturally.

One way to do this is through exercise. At the Postgraduate Medical Institute & Hull York Medical School in the United Kingdom, it was found that FGF-21 increased in the bodies of young women between the ages of 18 and 35 after they began to exercise. Researchers found that the levels of this hormone increased in each of the women involved in the study after just two weeks of increased actvity.

There’s a reason that FGF-21 is known as “the starvation hormone,” and another proven way to activiate the production of FGF-21 is through fasting. When the body is not getting enough calories, it produces a stress response in the liver, which in turn begins to produce more of the hormone. In the early 1900s, doctors began to look more closely at the practice of fasting as a way to improve health. The Cornell study that discovered that mice on a restricted diet lived longer also found that the mice were less suscepabile to developing cancer, diabetes, and other diseases. A 1946 study, this one out of the University of Chicago, noted that mice on an alternate-feeding day schedule lived longer as well. However, studies on humans have discovered that it takes at least 10 days of a restricted diet for this hormone to be produced on a large scale.

The Beth Israel Deaconess Medical Center in Boston reports that FGF-21 is stimulated shortly after a person ingests foods containing natural fructose. In fact, levels of FGF-21 rose rapidly after subjects consumed foods containing natural sugar. Foods high in natural fructose include most fruits, berries, honey, and agave nectar. Unfortunately, a study out of the Harvard Medical Center has found that table sugars and high fructose corn syrup also increase the production of FGF-21. The difference is that these processed sugars overstimulate production of the hormone until the body becomes desensitized to it.

In conclusion, FGF-21 is a hormone with many potential benefits, though further study of its effects in humans is necessary. Studies have also found that extended, high levels of FGF-21 has caused bone loss in lab animals. It is important that you discuss any potential major changes in diet and exercise with a healthcare professional.
[/nextpage]