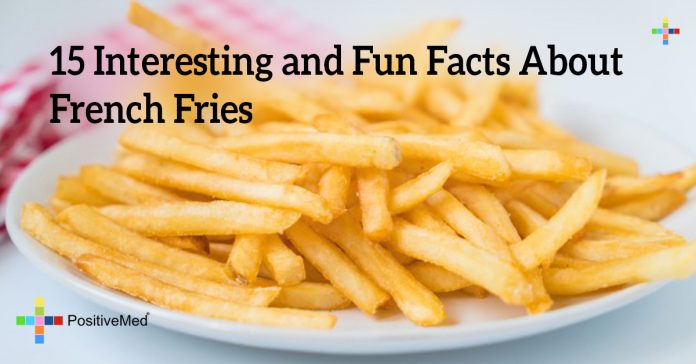 15 Interesting and Fun Facts about French Fries
By PositiveMed-Team
Edited By: Stephanie Dawson

1. The origin of French fries is Belgium. According to some historians, potatoes were being fried by 1680 in the Meuse Valley of Belgium. Locals often ate small fried fish, when the river was frozen they used potatoes as a substitute. They used to cut potatoes lengthwise and fry them in oil to use them as a fish substitute.

2. French fries were introduced in the US when Thomas Jefferson was President in 1801.

3. According to reports Americans eat more than 16 pounds of French Fries every year.

5. French Fries are not called that in France. They are known as frites, patates frites, or pommes frites in French. These names are also used in many non-French areas.

6. Potatoes are a great source of fiber and French fries are made from potatoes. Fiber helps pass waste through your system and lower cholesterol, consumption of a certain amount of fiber becomes inevitable. Your body may suffer from indigestion and stomach problems without fiber.

7. When you eat French fries, you are also getting some potassium, a nutrient present in potatoes. The energy you require throughout the day can be obtained from potassium. You may become more tired, have slower reflexes, and have weaker muscles without adequate potassium.

8. You body needs vitamin B6, also known as pyridoxine, this can be found in French Fries. Women may get even better benefits as B6 helps prevent bloating, menopause, and hormonal swings during the monthly cycle.

9. According to the Agricultural Research Service in Navarre, potato skins are packed with 60 phyto-chemicals, many of these are flavonoids which help lower bad cholesterol and keep arteries clear.

10. Potatoes are rich in kukoamines, the molecule that lowers the blood pressure. Your blood pressure can be lowered by eating French Fries everyday.

11. French Fries are high in fat as they are deep fried. Your risk of becoming overweight is increased when you consume these high-fat foods. They are particularly rich in trans fats and saturated fats.

12. French Fries should be consumed in moderation as they are particularly high in carbohydrates. Even though all living things require carbohydrates for survival, excess consumption can lead to diabetes, obesity, heart disease, and cancer.

13. The salt content in French Fries is high, if consumed regularly it can cause adverse health effects.

14. Pregnant and nursing women should avoid French Fries due to the presence of a cancer-causing agent called acrylamide.

15. Sometimes French Fries are made of sweet potatoes instead of white potatoes, baked instead of fried, may be cut into unusual shapes, or served with local toppings like vinegar or mayonnaise instead of ketchup.