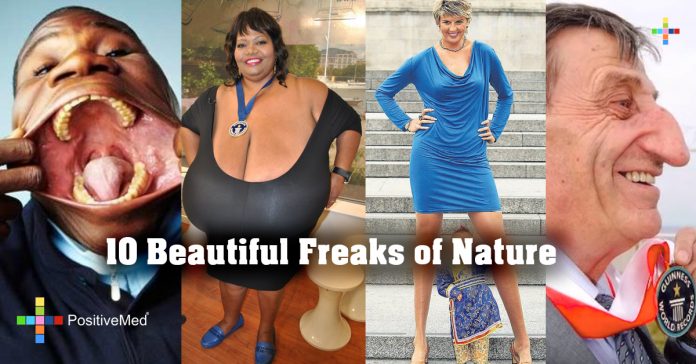 The Guinness Book of World Records holds some of the most bizarre accounts of the world’s craziest people. These individuals took it upon themselves to break records including being the fastest runner, weaving the longest rug, giving the most hugs, and making the largest pizza! Listed below are the top 10 most outlandish body parts you will ever see, according to Guinness. You will be shocked and may even be inspired by what you read!

1.) Coming in at number one is Francisco Domingos Joaquin who has the widest unstretched mouth, which is almost 7 inches wide. He can fit a soda can sideways in his mouth pretty comfortably. This is due to his ability to stretch his mouth and lips without breaking or bleeding. Pretty extraordinary if you ask me.

2.) Annie Hawkins-Turner takes the prize for the largest, most natural breasts in the world. She has an outstanding 70-inch bust and records claim her breasts started growing since she was only 9 years old! That’s a pretty early pre-pubescent phase if you ask me. She is also known by her pseudonym “Norma Stitz”. Get it?

3.) The longest female legs belong to Svetlana Pankratova, a Russian native. Her legs measure at 51 inches which is a little of 4 feet tall! Can you imagine your legs being the size of a 2nd grader? I’m sure plenty of women would kill for longer legs, but not longer shave times. Yikes!

4.) As we get older, our nose continues to grow and it eventually starts dropping. Fortunately for most of us, the change isn’t too noticeable and it suits our natural features. Mehmet Ozyurek, who originates from Turkey, has a nose that is almost 3 and a half inches long! It’s a bit perplexing, but hey I bet he also holds the world record for the best sense of smell.

5.) No one likes having loose and stretchy skin but Garry Turner doesn’t seem to mind. He is from the U.K and has a condition called Ehlers-Danlos Syndrome which affects the skin’s collages and decreases its elasticity. This disease helped him win the prize for the world’s stretchiest skin.

RELATED ARTICLE: This Veteran Broke Pull-Up World Record – The Way He Did It Will Shock You

6.) Thick eye brows are totally in nowadays, I mean I always see them pop up on my Instagram feed. Too bad most of them are drawn on. Leonard Traenkenschuh of Port Townsend, Washington doesn’t need to fake it to make it, because he holds the record for the longest eyebrows measuring at 3 inches long! Talk about being on fleek.

7.) We all know how awkward it was being a teenager. With all the acne, growth spurts, and high school crushes, it seemed like that awkward phase would never end. This doesn’t seem to be a problem for Supatra Sasuphan from Thailand, with the hairiest face on the planet. She comes in at number 7 for the fuzziest face! She states “Being hairy makes me special” and that she has tons of friends. I wish I had her confidence! You’re going places, kid!

8.) Going to the salon for a manicure can be a soothing experience, unless your nails are almost 24 feet long. Christine Walton has the world’s longest fingernails which she has not cut, nor trimmed, since 1990! That was 16 years ago! She manages her day to day life just fine, but she is extra cautious of those finger delicacies!

9.) How many licks does it take to get to the center of a lollipop? Not as many as you think for Emily Schlenker. She holds the record for the world’s widest tongue. Her tongue is 2.89 inches wide which measures to be almost 3 whole inches! That’s crazy! Or maybe it’s genetics.

10.) Beauty is in the eye of the beholder. Until your eyes pop out of your head. Kim Goodman holds the world record for the farthest eyeball pop which measures out to be 0.47 inches past her eye sockets. That’s almost half an inch outside of where your eye naturally sits. I am unsure how to “pop” my eyes out of my head so I won’t even try. Some things are best left to the experts.