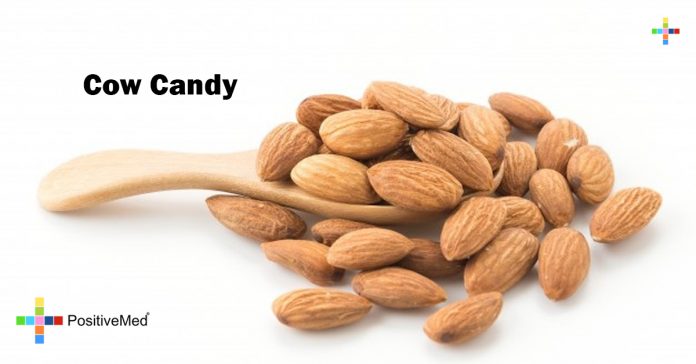 The price of corn is going up in some areas, so much so that some cattle producers think they have found the answer by supplementing their cattle’s diet with candy and food by-products such as orange rinds in Florida and almond hulls in California.  John Waller, a professor of animal nutrition at the University of Tennessee is not at all surprised by this and states that it is a viable diet and that the practice has been going on nationally for some time, “I think it’s a viable (diet), It keeps fat material from going out in the landfill, and it’s a good way to get nutrients in these cattle. The alternative would be to put (the candy) in a landfill somewhere.”

Waller also states that as long as the cows are getting the proper nutrients it does not matter where they come from, the feed also includes wrapped candy which they assume will pass right back out without damaging the animal. A farmer in Indiana was quoted as saying “Anything to keep feed costs down,” while feeding his cows a load of candy sprinkles he obtained on sale. Cookies, gummy worms, marshmallows, dried cranberries, Froot Loops, and wrapped candy are quite common as food brokers supply cattle farmers with these “garbage” foodstuffs to the highest bidder and farmers are getting in line to buy what they can.

As corn prices continue to rise due to the drought that is still plaguing most of the corn growing area of the United States the prices of alternate feed is rising as well, meat and dairy can expect a surge in pricing as well.