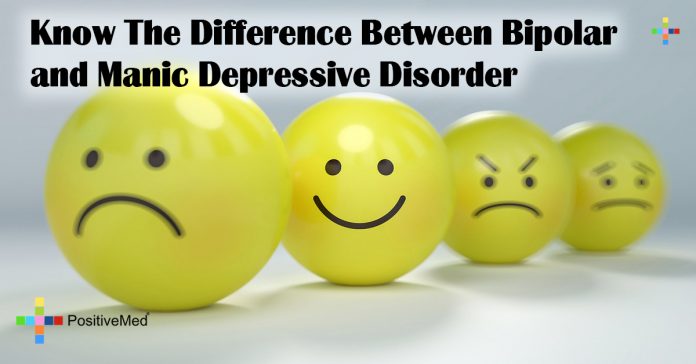 Know The Difference Between Bipolar and Manic Depressive Disorder

Many people are confused about the difference between the terms “bipolar”, “depression”, and “manic depression”. All of these terms refer to mental illnesses, but bipolar and manic depression refer to the same illness.

Bipolar is characterized by alternating moods of mania and depression. What is a manic episode?

RELATED ARTICLE: 7 Things Everyone Gets Wrong About Bipolar Disorder

Hypomania is a lesser form of mania where you might experience only a few of these symptoms or experience them with a low intensity. People with the more severe form of the illness are diagnosed with Type 1 Bipolar Disorder. Those who have hypomanic instead of full blown manic episodes are said to have Type 2 Bipolar Disorder.

Treatments for the Two Disorders

Mood stabilizers include drugs such as lithium. The newer atypical antipsychotics, such as Abilify, tend to be very expensive now.

The medications used for clinical depression are antidepressants. These drugs include Cymbalta and Wellbutrin. Antidepressants are also used in combination with other drugs for bipolar. However, there is always the fear that an antidepressant will put a person with bipolar into a manic state. Therefore, it is always used for bipolar with extreme caution.

Depression isn’t the only illness that is confused with bipolar disorder. Attention deficit disorder is also confused with it. Sometimes there are mistakes between them of misdiagnosis.

The cause of bipolar disorder is not entirely known. Researchers think that there are a number of factors including genetic, neurochemical and environmental ones. The current theory is that it is a neurobiological disorder that is caused by an imbalance of brain chemicals. Three brain chemicals, known as neurotransmitters, have been implicated. These are serotonin, dopamine, and noradrenaline.

Genetic factors seem to play a role in bipolar disorder. The illness runs in families. Also, twin studies have been done. Research on identical twins shows that if one twin is diagnosed with the illness, then it raises the risk for the other twin to also be diagnosed by between 40 and 70 percent. More research needs to be done, however, to confirm these facts.

Environmental factors seem to be triggers in people who have a genetic predisposition for the illness. A bad breakup or a death of a close relative can many times trigger a bipolar episode.