PositiveMed The Positive Side of Medicine
Home health men's health Enlarged Prostate: What It Is And How To Identify It 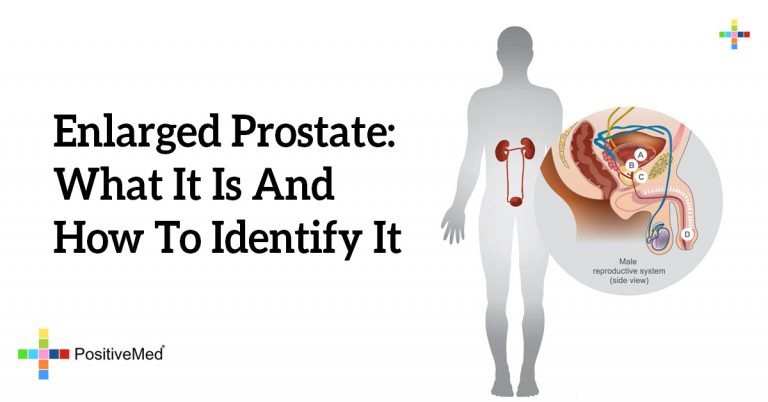 What is the prostate?

The prostate is the gland that produces a fluid that carries sperm during ejaculation. It surrounds the urethra, which is the tube through which urine passes from the body.

What is an enlarged prostate?

An enlarged prostate occurs when the gland has grown bigger or has become swollen. Enlarged prostate (aka “BPH” or Benign Prostatic Hyperplasia) is a common problem for older men, and urinary problems are typically the first indicator. This is due to the fact that urine travels out of the body in a small tube that runs through the prostate and a swollen prostate will make that process more difficult.

What are the symptoms of BPH?

• A feeling of incomplete bladder emptying
• Still having to “go” after visiting the bathroom
• A slow or weak urinary stream
• A urinary stream that starts and stops
• Difficulty beginning urination
• Frequent sense of urgency to urinate
• Often waking at night to urinate
• Straining during urination
• A continued dribble of urine before or after, or even at random times throughout the day

When the bladder isn’t emptied completely, there’s a risk for developing urinary tract infections (UTIs). Developing other serious problems can also occur over time, such as bladder stones, incontinence, blood in the urine, and the inability to urinate. A sudden and complete inability to urinate is a medical emergency that requires a doctor’s intervention immediately. In rare cases, kidney and/or bladder damage can develop from an enlarged prostate and its symptoms.

What are the risk factors?
The actual cause of prostate enlargement is unknown. There are factors such as aging and changes in the cells of the testicles, which may have a role in the growth of the gland. Men who have had their testicles removed at a young age, such as due to testicular cancer, do not develop BPH. Also, if the testicles are removed after a person develops BPH, the prostate shrinks in size. So, the facts are these:

• Chances for developing an enlarged prostate increases with age
• Some prostate enlargement is present in most men over 40; over 90% will experience it after the age of 80
• No risk factors, outside of having normally functioning testicles, have been identified.

How do I protect myself?

The good news is, there are a couple ways to prevent having an enlarged prostate through diet. Limit alcohol intake, avoid excessive amounts of spicy food and caffeine, eat plenty of fruits and vegetables, stay hydrated, and drink a glass of cranberry juice now and again (preferably at least 70% juice). As for supplements, increase zinc and try a vitamin B complex. Zinc is responsible for creating secretions that stimulate, and help the body absorb, testosterone. Hormone imbalances may trigger inflammation and irritate the prostate, resulting in prostate enlargement.

As always, eat more fish! Or, at least, find another way to boost the intake of omega-3 fatty acids. These acids are widely believed to have an anti-inflammatory effect and protect prostate cells. Salmon, tuna, trout, and other fatty, cold-water fish are great sources. However, omega-3 fatty acids can also be found in flaxseed oil, as well as fish oil capsules as a dietary supplement.