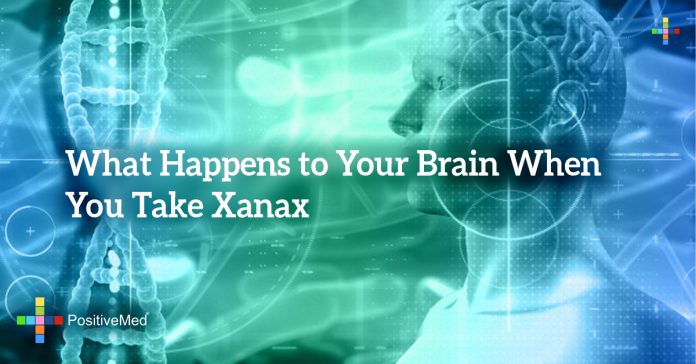 What Happens to Your Brain When You Take Xanax

If you suffer from an anxiety disorder, your doctor may prescribe Xanax. Known generically as alprazolam and first released in 1981, Xanax is a popular and widely-prescribed benzodiazepine that may be taken daily or used as needed. How does Xanax lessen anxiety, and what does it do to your brain? Let’s find out.

Anxiety and the Brain

In a healthy brain, nervousness causes the release of a neurotransmitter called gamma-aminobutyric acid, or GABA. GABA binds itself to more stimulating neurotransmitters like acetylcholine, dopamine, serotonin and norepinephrine, allowing the penetration of chloride ions that then block those neurotransmitters from firing. In an article written for the National Anxiety Foundation, Dr. Stephen Cox likens GABA to the brakes on a car. GABA slows down the neurotransmitters that would otherwise cause that initial nervousness to spiral into anxiety.

Effects of Xanax on the Brain

When an anxiety disorder is present, the brain may not produce enough GABA on its own. With nothing to stop the more stimulating neurotransmitters from firing, your brain speeds along like a car with worn brakes. Xanax increases the effectiveness of GABA, allowing it to bind to nerve cell receptors and release a far greater number of chloride ions. This permits the ions to work as intended, penetrating each nerve cell and communicating with the receptor to slow the cell’s activity. Without the repeated firing of the more stimulating neurotransmitters, the chemical activity in your brain balances out, making you feel calmer.

Effects of Xanax on the Body

Because Xanax is a depressant that works on the central nervous system, its effect is similar to that of alcohol. You may feel sleepy or less alert, and your mental and mechanical performance may be temporarily impaired. Because of a possible delay in reaction time, you should avoid driving or operating machinery after taking Xanax. Your heart rate and blood pressure may drop. You may feel lazy or numb, and your body may feel relaxed and heavy.

RELATED ARTICLE: The 2 Minutes Animation Helps You to Get Rid of Your Anxiety, Stress and Depression!

Over time your brain may compensate for Xanax’s effect by producing less GABA, and your liver may begin processing the Xanax in your system more efficiently, decreasing its effectiveness. If this happens, your doctor may increase your dosage. Xanax can be habit-forming, so it’s important not to alter your dosage on your own.

Common side effects of Xanax include drowsiness and dizziness. The National Alliance on Mental Illness notes several other possible side effects including irritability, sleep disturbance and difficulty concentrating. Talk to your doctor about any side effects you experience while taking Xanax.

Although the effectiveness of most natural remedies for anxiety remains unproven, the Mayo Clinic notes that several have shown promise in preliminary studies. These include chamomile, lavender, valerian and lemon balm. Natural remedies are often taken in pill or capsule form, but they can also be consumed as herbal teas or tinctures.

What do you think? Do you suffer from anxiety or panic attacks? Would you be willing to try a medication like Xanax, or would you rather try a natural remedy?