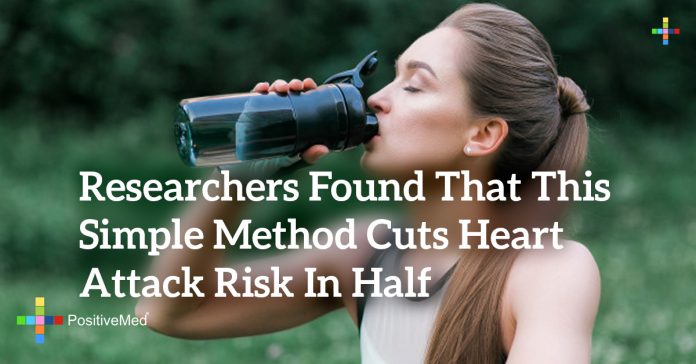 [nextpage title=”…”]
Each year, over 600,000 Americans die from heart disease, making it the leading cause of the death in the country. The modern American lifestyle and diet contribute to heart problems by increasing weight and blood pressure while lowering overall health and stamina. Though everyone knows that eating a healthy, high-fiber diet that is low in processed fats can reduce heart disease risk, there are many less well-known ways to keep your heart healthy.

This newly discovered method of preventing heart attacks may not be able to replace actually being healthy, but it can definitely help an already healthy person reduce their heart attack risk. A study recently published in the American Journal of Epidemiology found that subjects who drank more water had a significantly reduced risk of heart attacks. According to the lead researcher of the study, Dr. Jacqueline Chen, the study found an “association between high water intake and reduced risk of coronary heart disease…by drinking more plain water, healthy people reduced their risk of dying from a heart attack by half or more.”Researchers Found That This Simple Method Cuts Heart Attack Risk in Half

Experts believe that drinking water lowers your risk of heart attack because it prevents dehydration, which can have a negative effect on the circulatory system. When a person is dehydrated, their blood and plasma becomes more viscous, so the bloodstream is packed with blood cells that are not mixed in with enough fluid. Dehydration also raises levels of fibrinogen, the compound that causes blood clots, and cortisol, the hormone linked to stress that raises blood pressure. When the thickened blood, higher blood clot risk, and higher stress levels caused by dehydration are all combined, they create the significant risk of heart attack that was shown in the study.

RELATED ARTICLE: 5 Foods You Should Be Eating After A Heart Attack To Save Your Life

The findings of this study also help to explain why more heart attacks occur in the morning. When people sleep, they are typically going without a drink for about eight hours, which causes minor levels of dehydration. Though some doctors suggest that patients drink a glass of water before bed to lower heart attack risks, this normally just makes people have to wake up and go to the bathroom during the night. Maintaining hydration requires regularly drinking adequate amounts of water, instead of just chugging a huge amount all at once.

Doctors continue to recommend most patients drink at least eight eight-ounce-sized glasses of water each day to avoid dehydration, but some suggest that people need even more water if they have a larger body weight. In general, drinking half of your water weight in ounces each day will ensure proper hydration. This means that the a person who weighs 150 pounds would need to drink 75 ounces of water each day, which would be roughly nine eight-ounce-sized cups of water each day. It is also important to realize that caffeinated drinks like tea, coffee, or some sodas, do not count towards your daily water total. Caffeine is a diuretic, which causes the body to flush out water and urinate more frequently, so you do not actually get all of the liquid benefits from caffeine. The researchers of the American Journal of Epidemiology study recommend that plain water is the best way to reduce heart attack risks.