PositiveMed The Positive Side of Medicine
Home Facts Find Out the Difference Between Bacterial, Parasitic, And Viral Infections 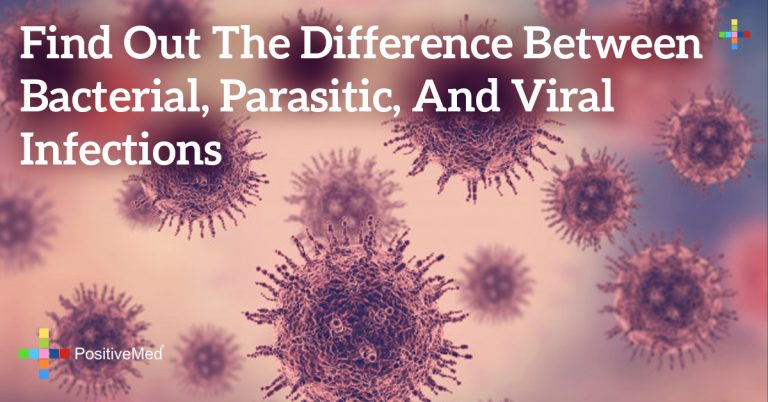 Find Out the Difference Between Bacterial, Parasitic, And Viral Infections

[nextpage title=”…”]
There are many things that can contribute to the same symptoms. Common symptoms in a health condition include sore throat, chills, and achy muscles. But how are you supposed to know how to treat your symptoms if you are unaware of the cause? The conditions that can cause similar symptoms are all different in how they affect the body and how they are abolished. Here are the differences between viral, bacterial, and parasitic infections.

Viruses only exist to replicate. They are very small, in fact, they are the smallest proxy of infectious disease. Most viruses are round and are approximately 20 – 200 nanometers in diameter. Viruses are essentially a very small piece of genetic material that is surrounded with a thin coating of protein coating. Viruses may also contain a small amount of fat. They can be found in soil, water, and sir.

Viruses, unlike other infectious microorganisms, cannot reproduce outside of a host cell. Viruses do not consume food, but rather absorb the energy and materials from their host cells. Viruses are able to infect almost every kind of organism, some even infecting bacteria and fungi.

Some viral diseases are Norovirus and Hepatitis A.

Bacteria are much larger than viruses, measuring ten to 100 times as large. Typically one to three microns long, they are rod or sphere shaped. Most bacteria usually inside of a fatty membrane and consist of DNA and cellular machinery.

Some bacteria are actually beneficial and aid in the body’s processes such as digestion. They can also break down sewage and are added to certain foods such as yogurt. However, when a bacteria becomes spoiled, it affects the smell, texture, and taste of a food.

Bacteria gain energy from the same sources that people do, including protein, sugars, and fats. Bacteria need a low pH, time, nutrients, oxygen, and water to grow. They also need to be at a growing temperature between 41 degrees F and 140 degrees F. While some bacteria are able to live and reproduce in their environment (such as food), others are able to adjust to life within a host. Bacteria can be so fast-growing that it quadruples in number every half hour, while other strains of bacteria take weeks or even months to reproduce.

Some foods that are a common place for bacteria to grow include rice, meat, fruits, and vegetables. Bacterial spores are able to survive through cooking and freezing, as well as disinfection. Some common ways to keep bacteria from multiplying on food include salt curing, blast chilling, acidifying, dehydrating, and vacuum packaging.

Bacteria can cause a wide variety of types of diseases, from mild topical irritation to fatal pneumonia.

Unlike bacteria or viruses, parasites share a lot of features with human cells. They are part of a group of organisms referred to as eukaryotes and have their own defined nucleus. Parasites can be found in animals, soil, air, and water and contracted through a contaminated source.

Mostly larger than bacteria, some parasites that are resistant to the environment are about the same size as bacteria. While some parasites are only able to live with a host providing nourishment and protection, some can live and reproduce on their own in the environment. Parasites can either be made of a single cell or many cells.

In underdeveloped countries, parasites that are made of only one cell are a large source of widespread disease. In the United States, waterborne parasites are the most commonly reported causes of parasitic disease.

Some diseases that are caused by parasites include Taeniasis, Anisakiasis, Trichinosis, Cryptosporidiosis, and Giardiasis.

There are clear differences between these disease-causing organisms, but they may all result in similar symptoms. Knowing the basis of an infection is important in its course of treatment as well as follow up care. It is also helpful to identify the source of the problem in order to prohibit it in the future.