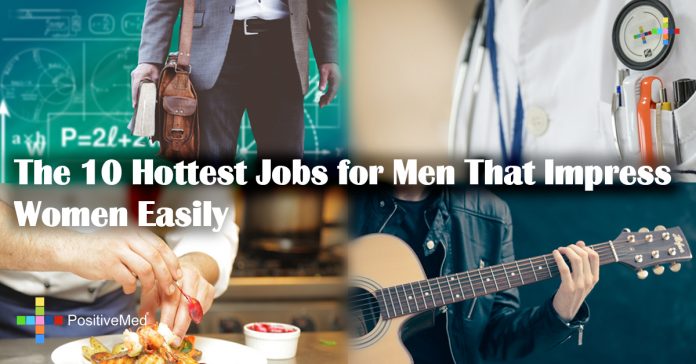 The 10 Hottest Jobs for Men That Impress Women Easily

[nextpage title=”…”]
While any guy can be super attractive in his own right, some women fall for guys initially because of their jobs. You might be surprised to know that this phenomenon doesn’t necessarily have anything to do with money. Here are the top 10 hottest jobs a man can have.

Number 10: Chef
Women love a man who can take care of them, and what better way to be taken care of them than to come home to a delicious gourmet meal? A chef may not bring home as much cash as many other professions, but the knowledge that a divine meal is a batted eyelash away, is more than enough to make men in this profession a hot commodity.

Number 9: Musician
Often times, the media portrays musicians as irresistible bad boys with deep souls. Between their talent and apparent sensitivity, musicians are among the most sought after men. Besides, women can’t resist being the inspiration to the next greatest love ballad. From rockers to concert pianists, women love a man with music in his soul.

Number 8:Teacher
According to a recent study on Tinder, male teachers are among the most desirable men. Women love intelligent men who are good with children. What better profession to find this combination than with a male teacher? Besides, with the current teaching shortage, teacher job security is fairly high.

RELATED ARTICLE: 5 Proven Tips on How To Impress Your Woman

Number 5: Police Officer
Much like popular superheroes, police officers work long hours for little thanks keeping the streets of their cities safe from crime. Women can’t seem to help but fall for these men who perform selfless acts of heroism. Besides, the uniform isn’t bad either.

Number 4: Fire Fighters
From movies to steamy calendars, fire fighters are viewed as some of the hottest men around. From their chiseled physiques to their noble acts of valor, women everywhere swoon over these buff men of bravery. It helps to know that these valiant men not only risk their lives to save people, but they save animals too. It’s hard not to fall for such caring.

Number 3: Cowboys
Cowboys are often portrayed by the media as rough and rouged hard quiet men who work hard and love deeply. Their lives are seen as simple, positive, and full of happiness and love of family, religion, and life. It’s easy to see why women would love to fall into the arms of a cowboy when country music so often compares women to angels, and portrays them as a man’s number one priority.

Number 2: Pilots
According to tinder, Pilots are contacted more often than any other profession and, it’s easy to see why. Pilots have been portrayed as exotic heroes that can show a woman the whole world. Be they in Air Force or pilots commercial pilots, it’s easy to see why they are so desired.

Number 1: Soldiers
According to a study by the University of Southampton, soldiers are the most sought after men in the world. Soldiers are the ultimate protectors. They regularly risk their lives to protect their country and its freedoms. women love these heroes for their dedication, and strength. Besides, men look great in uniforms.

In the end, women love men more for who they are more than what they do. A career can be $exy but, the man is more important than the uniform. A man who is genuine, kind, and a genuinely good person is far more attractive than any particular occupation.
[/nextpage]