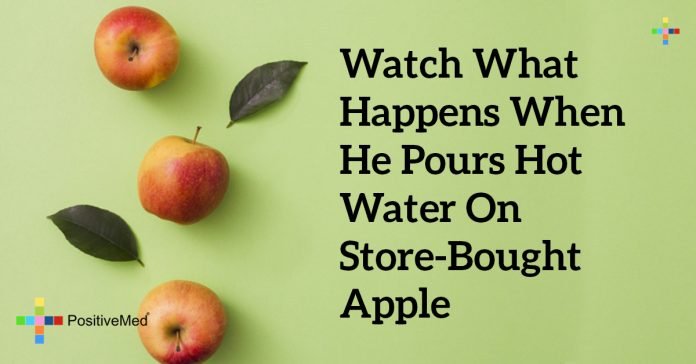 This experiment of pouring boiling water over a store bought apple exposes the scary truth behind modern fresh fruit preservation. In order to keep apples fresh for months after the picking date, they are coated in a thick layer of engineered wax. The wax formulas are only fully known to the companies that produce them, but several of them contain fungicides, processed plastics and other petroleum products.

Most concerning is the use of morpholine. It was found in previous World Health Organization studies to transform into N-nitrosomorpholine, a known carcinogen, The presence of nitrate, found commonly in the diet, causes this transformation. The World Health Organization warned against ingesting morpholine, but they later allowed its use in food coverings by saying that the amount was too low. The European Union then banned morpholine, but other countries continued to use it.

RELATED ARTICLE: EASY WAY TO REMOVE PESTICIDES FROM YOUR FRUITS AND VEGETABLES

There has been an overwhelming increase in the use of petroleum in food waxes and coverings despite patterns of cancer occurring. There is little research done on this topic, and what research does exist tends to be deleted from the archives. The blogger, analyzes many popular food waxes and coverings and their ingredients. PVC, used to make pipes for cables and water pipes, is a popular ingredient in food wax and coverings. BBzP, found in vinyl tiles and traffic cones, is another common food wax ingredient.

The Environmental Protection Agency recommends scrubbing apples with baking soda and water before eating them. The World Health Organization recommends scrubbing with lemon juice. Several health, vegan and food websites recommend buying organic apples and asking if they have wax, because they might. Some sites say just to grow the apples yourself. Apples themselves help prevent cancer, but they are unfortunately coated in an unhealthy wax to preserve appearance and profits.

RELATED ARTICLE: Why You Should Never Wash Your Raw Chicken