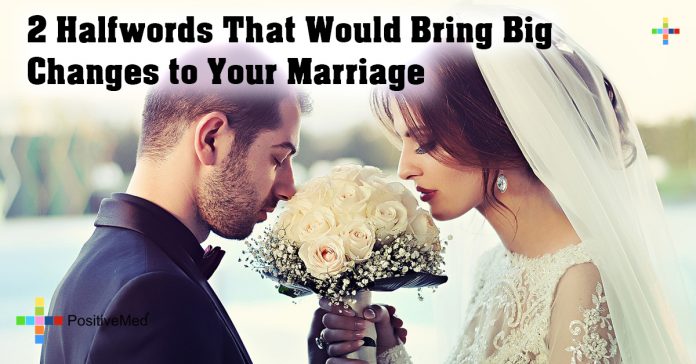 2 Halfwords That Would Bring Big Changes to Your Marriage

Relationships require a lot of work. Even when we are deeply in love with our soul mate, conflicts are bound to arise on a regular basis. When couples are faced with conflict, some reactions are better than others. Conflict can either build or eventually destroy the relationship or marriage.

According to an online article from Glamour magazine, Dr. John Gottman identified three different personality styles for approaching conflict. Avoiders feel uncomfortable with any differences of opinion and will often try to ignore the problem. Volatile people put their hearts on the table and can express their opinions with an emotional fervency. Those who are validators have both characteristics and have an easier time with conflict resolution, says the article.

The author discusses a new way of conflict resolution that she discovered in a meeting. The attendees were asked to have a group conversation. If something was said that offended someone, then that person was to say “Ouch!” The offending person needed to immediately say “oops” and apologize, says the article. It was a way of showing how people can express their feelings when there is a conflict in their relationships.

She writes that she decided to use the two special words with her husband. To both of their surprise, saying “ouch” and “oops” helped open a dialogue when they disagreed. The author claims to be a classic avoider and her husband has a volatile style. She said that she was able to be more concerned with her husband’s feelings and that he could express himself a little more calmly.

Of course, says the article, there is no magic solution to conflicts. However, ways to improve dialogue can be helpful in the long run. According to an online article on loveisrespect.org, communication is imperative for a healthy relationship. It is also the key to understanding each other’s feelings and opinions.

It is impossible to be in a relationship without a few disagreements. Since it involves two different people, there is always going to be a difference of opinion or something said that is taken offensively. While conflict is inevitable, using “ouch” and “oops” can start the process of resolving it. Conflicts that are just ignored can avalanche and ruin a relationship quickly.

One of the ways that saying “ouch” is helpful is to for people to let their mate know that they were hurt by something that was said. People cannot apologize and address a painful situation unless they know about it. Saying “ouch” stops the harmful pattern of silent suffering and bitterness.

RELATED ARTICLE: 10 Things Every Man Should Do To Improve His Relationship

There is a quintessential game that many couples play. One is cold and hardly speaking while the other is dumbfounded and irritated by the tense atmosphere. When this person asks what is wrong, the other replies, “If you do not know, then I am not going to tell you.” Guessing games and misunderstandings undermine quality relationships. A quick “ouch” as soon as the offense is given gets everything out into the open.

We can all be offended by different things. While one person may consider a comment or action amusing or innocent, it could be something that hurts another person. Saying “ouch” lets the offender know that something wrong has been said or done. When the other partner realizes that the action or words was hurtful, he or she will be less likely to repeat them. There is no glory in being a martyr. People who value their partners and relationships need to let them know if a line has been crossed.

After hearing an “ouch”, then one needs to quickly reply “oops”. This is more than just apologizing. Saying “oops” lets the other person know that the offense has been acknowledged. Many people half-heartedly say they are sorry and do not even know what they did. The offended partner will not feel validated and the offense is likely to be repeated in the future. “Oops” instantly recognizes the hurt feelings and open dialogue to apologize and resolve the issue.

Not every “oops” is going to end in an apology. There are times when opinions will differ and the couple just has to agree to disagree. How that agreement is met is the key. Respecting each other’s opinions can reduce a brewing conflict. This may be the ideal time to discuss a compromise. Some things are not worth an argument. Saying these words can build empathy in a relationship. We find out more about how our partners think when we know what offends them. Looking at a situation through another person’s eyes may even change our minds.

The important thing is to let each other know how we feel and quickly resolve hurts and misunderstandings. Communication is the air that keeps relationships alive. Since no one can truly read minds, it is best to voice our feelings. Talking things out can be healing. Good relationships are worth the effort.