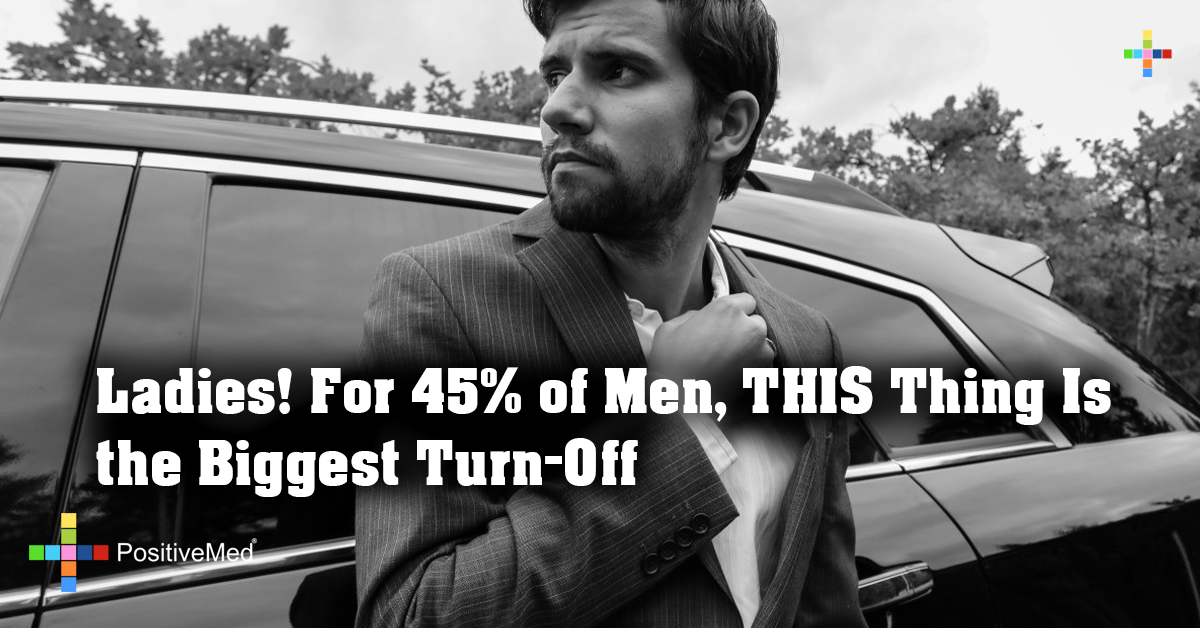 Ladies! For 45% of Men, THIS Thing Is the Biggest Turn-Off

Many women may be unsuccessful at relationships or find it difficult to land a man long-term when they’re looking for love. Although they may not understand what they’re doing wrong, there are a number of factors that may be turning men off on the dating scene. To attract more men and avoid making mistakes, there are a few common turn-offs to avoid.

One of the most common turnoffs for men is when women want to control their partner. Control limits a man’s ability to have freedom and can cause him to feel suffocated in the relationship. Women who are controlling can have a tendency to become jealous, which can make for a dramatic relationship that has a lack of trust over time. It’s important to go with the flow and remain flexible with a carefree attitude that will end up being more attractive. Men don’t want to feel as if they have to walk on eggshells just to spend time with their friends or watch a movie alone in their man cave.

According to telegraph.co.uk, one of the main deal-breakers for men is an unclean or disheveled appearance that doesn’t look put together. 63 percent of men aren’t attracted to women who lack in maintaining their personal hygiene or are lazy with their physical appearance. Although women don’t have to become vain, they can still make an effort with their looks by shaving their legs, styling their hair, and wearing a bit of makeup each day to enhance their natural features.

Women who tend to be overly clingy and needy often turn off men due to their lack of independence. This can cause men to feel smothered and will naturally make them withdraw from the relationship. It’s important for women to limit how much attention they need from their significant other and avoid filling their schedule with time that is only spent with their man. Men are more attracted to confident women who don’t depend on the opposite gender to survive in life.

Although it’s normal and healthy for women to have an emotional attachment to men, it’s shouldn’t cause him to feel suffocated or lead to conflict. Women who are anxious or neurotic will cause the relationship to suffer quickly due to their heightened emotions.

According to magazine.foxnews.com, women who are obsessed with themselves are less likely to attract men. Although women may assume that their behavior is cute and may use it to flirt, men don’t want a woman who is overly self-involved.

This includes when women are obsessed with their appearance and take too much time getting ready in the morning or when heading out on a date.

RELATED ARTICLE: 10 Things Men Do That Turn Women Off

Many women struggle with insecurities, but it can be a turn-off to men when it becomes a daily problem. Women who degrade themselves or have a lack of self-confidence aren’t attractive to men because they often appear weak and negative with their attitude. Women who are constantly complaining about how much weight they need to lose or their lack of intelligence will only make their men focus on their negative aspects, which can cause them to become less attractive. Men want women who are independent and secure in themselves, which will make it easy to show them off and feel proud to find such an incredible person. Make it a point to maintain a positive view of yourself and look at your failures as an opportunity to grow.

A Lack of Respect

Women who nag men or complain about what they’re doing wrong in life or in their relationship tend to detract men quickly. Men want to feel valued and respected with their significant other, which will allow them to feel fulfilled in the relationship. It’s important that men are encouraged and uplifted with their successes, which will allow whim to feel valued and supported for a high level of respect.

This includes avoiding putting men down or belittling them, in addition to comparing him to other men with his failures. Men should feel most honored and respected by the women that they’re with, which will attract them even more to their partner.

Women may not understand why they aren’t attracting the right guys or can’t find a long-term relationship, but there may be a number of factors that are often turning off men. It’s important to be aware of your behavior and change your old habits if they’re known to detract guys who are looking for a relationship.