Why Do You Kiss With Your Eyes Closed? 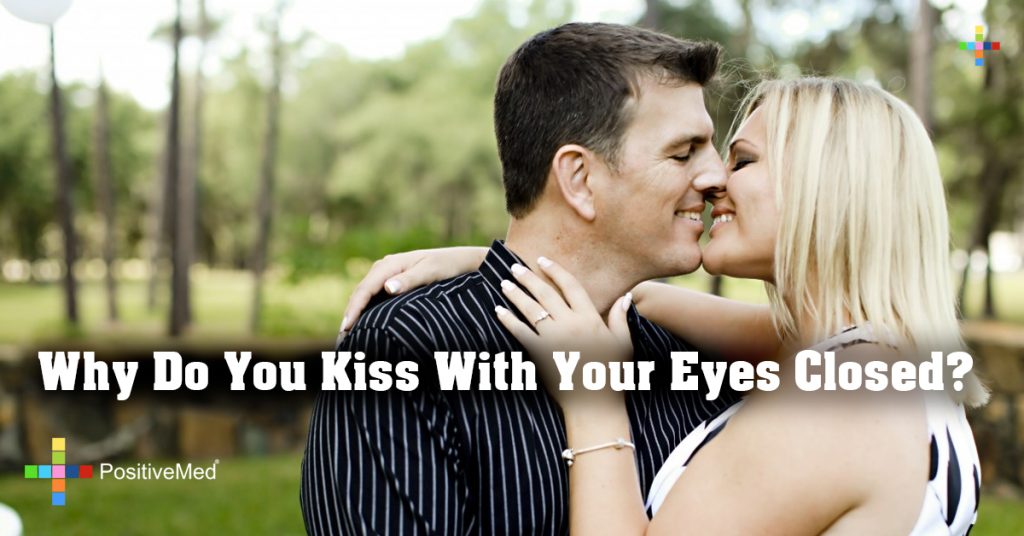 Why Do You Kiss With Your Eyes Closed?

Let’s begin at the beginning. Why would anyone kiss in the first place?
As it turns out, 90 percent of the human population practices kissing behaviors without having cross-cultural contact with other kissers. Animals rub noses with other animals, and some make the same kissing gestures that humans do. So, kissing may be a vestigial instinctive behavior, according to Your Tango Experts. Kissing could be reminiscent of mother animals or humans passing on chewed food to toothless babies, or pigeons placing digested food into squabs’ beaks. Romantically uninspiring, don’t you think?

But here’s an interesting take on it. Sniffing may have a bearing upon kissing.
Sniffing out a quality mate is not only a trademark of canine culture. Science.org pontificates that we kiss to sniff out a potential mate. Our pheromones trade off vital biological information when our faces touch. In fact, here opposites seem to attract. Women are reported to prefer the scent of a man whose genes for immune system proteins vary from their own. If the match moves along, the offspring will have a good chance of strong immune systems and so survive.

But why do we close our eyes when we kiss? That could possibly foil the aim of the food-processing mothers and the sniffers, wouldn’t it?

RELATED ARTICLE: 7 Types Of Kisses From Around The World You And Your Partner Should Try

According to Independent News, psychologists believe they know why people close their eyes when they kiss, and it is not at all related to feeding behaviors or sniffing.
Whew!

A study was made on vision and tactile sensory experience at Royal Hollaway, University of London. Two cognitive psychologists, Sandra Murphy and Polly Dalton, found that “tactile awareness depends on the level of perceptual load in a concurrent visual task.” This is a bit of information-overload suggesting that, with pleasant tactile experiences, people may just want to forgo visual experience and focus on the issue at hand. The lips have many sensual nerves that stimulate the brain.

If we ask the men at Askmen.com, they agree that kissing with eyes closed focuses on the physical experience. Visual distraction leaves less room to, well, really focus.

Let’s dig a little deeper, and delve into the cross-wired curiosity of synesthesia. In the case of the synesthete, when one sense activates, another sense spontaneously turns on. So, for example, the person might hear a loud sound and see a flash of white immediately. Some people hear sounds when they see moving dots, and I see colors when imagining the days of the week. In the surreal surroundings of the complete synesthete, a musical recording may smell like flowers, foods taste like a noise, and sound may have a texture and a shape!
In 1812, the condition was referred to as a ‘mild insanity’. But today, DTI (Diffusion Tensor Imaging) lets scientists see connections between various brain regions. They posit that there is increased connection between senses in synesthetes. In fact, the current thought is that all persons have the connections for synesthesia, but the phenomenon is shut off for some reason.

Studies report that synesthesia is seven times more prevalent in poets, artists and novelists than in the rest of us, and these people are better at connecting unrelated ideas, especially romantic ones!

Synesthesia is thought to be genetic, and may have an evolutionary advantage that brought about kissing with eyes closed in the first place. In times of survival, very few beings would put themselves in the vulnerable position of voluntarily closing their eyes while doing anything but sleeping in a very safe place. So, theoretically, a synesthete would be able to kiss with eyes closed and relish the tactile experience, but some of the senses would remain wide open to potential danger!

PrevPreviousLadies! For 45% of Men, THIS Thing Is the Biggest Turn-Off
NextAbdominal Bloating Even if You Not Overate? – Do THIS for Immediate ReliefNext