PositiveMed The Positive Side of Medicine
Home Lifestyle Relationship Every Woman Needs To Know: 4 Reasons Why Men Leave Women 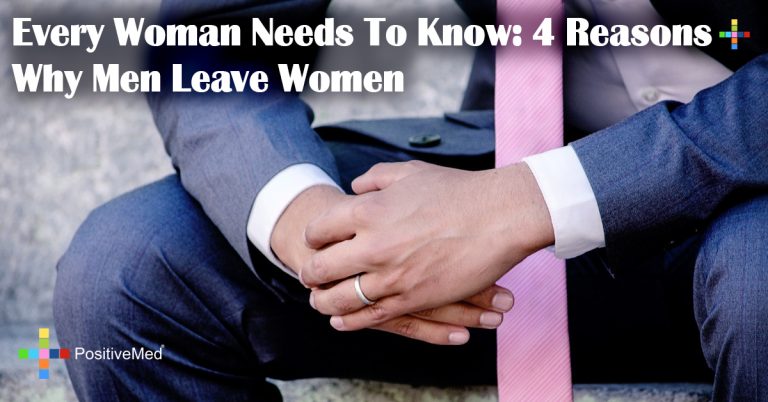 Every Woman Needs To Know: 4 Reasons Why Men Leave Women

Now that people are more accepting of breakups and divorce, some people are able to escape from truly unhealthy relationships. But what if a man leaves a good woman, and she and everyone else is left wondering “Why?”. Everyone may tell her that she’s a good woman, but why did he leave if this is true? Of course, it might have everything to do with him and nothing to do with her.

He might be interested in her, and he might even have pursued her. But once things start getting serious, he heads for the hills. There may be nothing she could have done to avoid this. Some men simply aren’t ready for commitment.

According to one study at the Tel Aviv University, a fear of commitment in adults may stem from childhood attachment styles, so it definitely has nothing to do with the woman!

2. He Has Immature Views of Relationships

You’ve heard what they say about modern relationships: people end them rather than fixing them. And it’s true that small-picture thinking can be damaging to relationships.

It could be simply that he doesn’t realize all relationships, even those that have the greatest potential to succeed, are hard work. This work should be rewarding, but it’ll last as long as the relationship does. As a couple progresses, they will become better at communicating and the effort should decrease.

3. He Thinks He Can Get Better

Perhaps it’s a midlife crisis that has him wondering what he’s been doing with the same woman all this time. German researchers found that people are likely to experience such dips in happiness in their early 40s. This coincides with a study done by AARP Magazine that shows that most 73% of divorced adults between middle-age and senior years divorced in their 40s.

RELATED ARTICLE: Things You Need to Know Before You Commit To Someone

As he looks in the mirror, perhaps he sees that he is aging and that his wife is, too. Maybe there’s someone who has been flirting with him in a way that his woman hasn’t in some time. The attention makes him feel good. It might even lead to an affair. Either way, he’s wondering whether he really wants the same things he thought he wanted when he was a younger man.

4. He Thinks He’s Not Good Enough

Sometimes it’s not because a man doesn’t recognize a woman’s worth that he breaks up with her. Instead, it’s precise, because he does realize this that he decides to leave her. It hurts her either way, and it might hurt him just as much if not more.

When a man leaves a woman, for this reason, is because he’s saying “You’re too good for me, and I don’t trust your judgment when it comes to picking partners.” But if she’s actually a good and smart woman, he needs to let her make that choice.

Furthermore, if his reasons aren’t necessarily true and are grounded in self-doubt rather than reality, he could be missing out on a relationship with amazing potential.

Sometimes may leave his woman only to realize it was a bad idea and she really was a good one all along. Or he may find himself and realize he’s changed in a way that his relationship doesn’t fit.