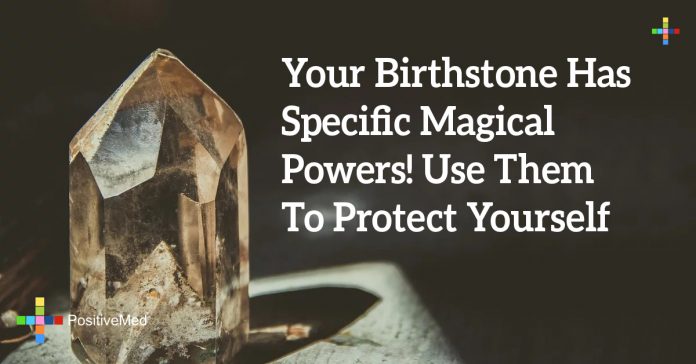 Your Birthstone Has Specific Magical Powers! Use Them To Protect Yourself

While you may think of your birthstone simply as a gem, the gemstones used for birthstones have been valued for their beauty and rarity since ancient times. In the early days of birthstones, each stone was believed to have specific magical powers, which would provide the wearer with protection, healing or other powers. The gems we now associate with each month are not necessarily the same ones used in the beginning. Historically, color, rather than the specific stone, was the most important feature. Here are some of the powers associated with each birthstone:

January
The garnet is thought to prevent nightmares and provide guidance through the dark. It is also associated with love, faith, and consistency. Although garnets are generally thought of as deep red, they come in nearly every color.

February
The amethyst, which comes in different shades of purple, is said to provide peace, courage and protection. It is also said to strengthen relationships and protect against drunkenness.

March
The blue-green aquamarine stone is associated with love, health, courage and hope. Drinking water in which aquamarine was soaked is said to cure heart, stomach and liver diseases.

April
Diamonds are a symbol of eternal love (hence their association with engagement and wedding rings). They are also associated with courage and invincibility. Through that courage, wearers are believed to be able to overcome difficulties.

May
For many years, the green emerald has been believed to have powers connected to fertility, love and rebirth. Now, the stone is also associated with growth, patience, and wisdom.

June
Both pearls and moonstones represent chastity, modesty, purity, integrity and happy marriages. Although often associated with their creamy-white color, they also come in black, chocolate, and gray.

July
Harmony and peace are both associated with the red ruby. While protecting the wearer from evil, the stone is believed to provide the person with good friends and good luck as well as strength.

RELATED ARTICLE: True Meaning Of Your Personality According To The Native American Zodiac

August
The light green peridot symbolizes strength, beauty and morality. It is also believed to provide protection against evil, depression, and nightmares.

September
Most commonly associated with blue sapphires also come in other colors. This gem is known for the power to ward off evil and poisoning. Anciently, it was believed that placing a venomous snake in a vessel made of sapphire would kill the snake. Sapphires are also associated with purity, wisdom, and faith.

October
Opals and tourmaline are known for their powers of innocence, hope, confidence, and creativity. They are also thought to protect from evil and protect eyesight.

November
Yellow topaz and citrine are associated with healing of both the mind and body. Strength and increased intellectual abilities are also associated with these stones. They are believed to protect the wearer on travels and provide the person with good mental health.

December
Tanzanite, turquoise, and blue topaz are all associated with happiness and good health. Peace and relaxation are also associated with these stones, which can vary in color from blue to blue-green and can even be found in a light green color.

While your own birthstone likely holds a special place in your heart, it is worth understanding the powers associated with other stones. You do not have to only enjoy the benefits of your own birthstone. In ancient times, those who could afford it, would purchase all 12 stones to reap the full benefits of the gems’ powers. If you are interested in heightening the power of your birthstone or another birthstone, legend says the stone’s power is greatest when worn during its assigned month. Even if you believe the stones’ powers are only legends, it is worth testing out their powers for yourself.