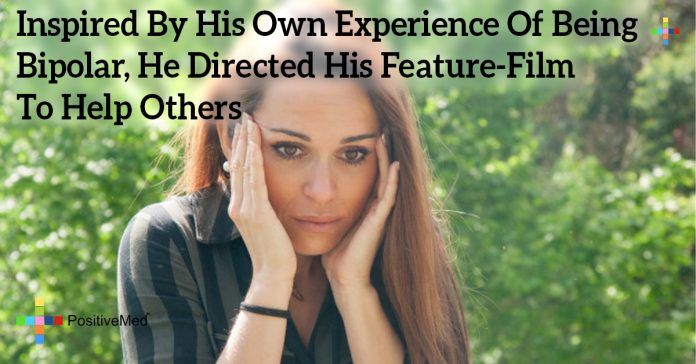 Inspired By His Own Experience Of Being Bipolar, He Directed His Feature-Film To Help Others

My name is Paul Dalio. I’m a filmmaker, husband of my NYU film school classmate, father of two children, and bipolar. Of these labels, the one I’m certain stands out in your mind is bipolar – and not in a good way. That’s no fault of your own since you probably don’t know much about it, other than what you’ve heard.

So how do I deal with this label? What other label do I have to choose from that’s not a disorder, disease, illness, or defect in my humanity? I remember when I received the label at age 24. All every medical book had to offer was that if I stayed on these meds, which made me feel no emotion, I could live a “reasonably normal life.” I didn’t know exactly what that meant, but I was pretty sure it sounded like “just get by.”

Six months later, I came across a book, “Touched with Fire,” by Kay Jamison. It was the first medical text showing a tangible correlation between bipolar and artistic genius, profiling some of the greatest artists in history. For the first time, I heard words, shining right through every medical book’s thick printed clinical ink, describing something I could be proud to be. I was like, yeah, that’s what I am. I’m “touched with fire.”

It would be destructive for me to deny all four seasons of the bipolar fire. When summer’s mania exceeds its stay and the fall shadows grab hold of your brain, you can feel your will within each withering leaf clinging to the trees of the entire forest surrounding you, slipping as they fall down on you. And then when winter rolls around, your soul retreats deep beneath the frozen ground and it’s calling your body down, it feels like your ashes are fighting gravity. And when spring returns, it extends a warm invitation to rise too high and repeat the bipolar cycle that will lay waste to your lives.

Likewise, it would be unwise for a doctor to deny that on those manic summer nights when we look out our hospital windows we can see the stars pulsing spirals of fire across the sky, as God lifts the veil and unfolds the entire universe before our eyes, because we know that humanity’s most beloved image of the sky was seen through a sanitarium window with Van Gogh’s manic eyes.

RELATED ARTICLE: 10 Signs To Identify Bipolar Disorder And How To deal With It

The reason why it would be unwise for a doctor to deny this reality is because if the doctor acknowledged that maybe it wasn’t just some misfiring synapsis flashing through a crack in our minds, maybe it was something special -he would also be able to remind the patient that while Van Gogh may have seen that sky through manic eyes, he didn’t paint it when he was manic, because he didn’t need the mania to have the fire. And that doctor would then be able to assure the patient that he or she doesn’t want to stomp out that fire. That over time, with gradual adjustments in medications, the doctor (and patient) would work together to make sure the patient keeps that fire, and sustains it without letting it get out of control and burn down his mind. How much more receptive would a patient be to treatment if the patient was told that the treatment was to nurture a gift, instead of terminating a disease?

However, in order for this to work, the doctor has to be able to trust the patient just as much as the patient has to be able to trust the doctor. My doctor trusted me. He saw I was impeccable with my health habits, patient, and I would be satisfied without mania. In return, he was never satisfied until I felt I had full, rich emotion. I now feel deeper, richer emotion and more creativity than I ever did before bipolar – to the point that I can call it a gift, so much that given the opportunity I wouldn’t want a “cure.”

Still, I know I’ll always walk a tightrope. But you get better at it over time, and like the guy who crossed between the Twin Towers, you learn not to fall, and the higher the stakes and tighter the wire, the stronger and more disciplined you’re forced to become in order to survive. It’s only when things are so dark you can’t see hope one inch in front of your eyelids and it’s so cold, your soul is numb that you don’t even know if it still exists, when just as your dim glow is this close to being blown out by your own lips, a sudden spark of grit and will to live breaks into a flame of desperation, raging to blaze its way into the light of day again. So by the time you finally rise, the light in all those sunbathing souls combined could not hold a candle to the fire in just one of your eyes. And when you combine that with the bipolar fire, no matter what anyone labels you, that is something they can’t deny.

Inspired by his own experience of being bipolar, Paul Dalio wrote, directed, edited and scored Touched with Fire, his feature-film debut starring Katie Holmes and Luke Kirby. Touched with Fire will be released theatrically on February 12, 2016. Learn more at www.touchedwithfire.com.