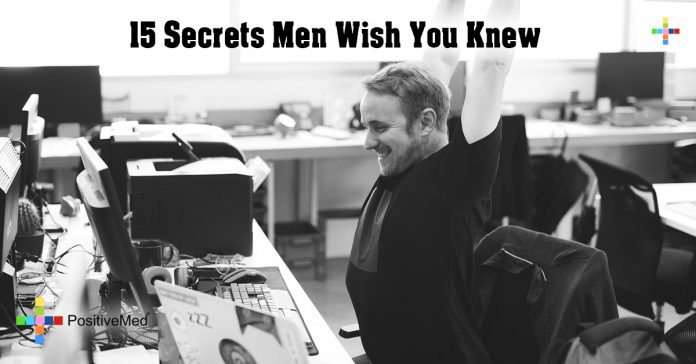 Men and women don’t always think the same way. Many men wish their wives, girlfriends, and the other important people in their lives knew these fifteen simple things.

Let’s face it: men and women aren’t always going to agree. They’re just wired differently and all too often, that can lead to disagreements. If you’re a woman hoping to better understand that special guy in your life, you’ve come to the right place. These fifteen facts will help you get inside your guy’s head a little bit better.

1. Guys have body insecurity issues, too. They’re not supposed to. They certainly can’t mention it as easily as you can. Many men, however, have issues that are just as important as yours. They wish they didn’t have that beer gut, or that their shoulders were more defined, or that their “problem area” would just disappear.

2. Nagging sets off alarm bells in your guy’s head but not the kind you probably want. Most of the time, he’s just tuning you out and wishing you would stop.

3. Men take commitment seriously. When they’ve given themselves to your relationship, they’re all in. They might not express it the same way you do walking through the mall holding hands and staring into each other’s eyes probably isn’t going to make their top ten dates list, but you’ll see their commitment in other ways.

4. Many men express their love through actions. Does he take care of a chore he knows you hate? Mow the lawn every weekend, even though the weather is viciously hot? That’s your guy showing how much he loves you. He’s better at that than he is with words.

5. Men need time for themselves. They’re less relational than women, and sometimes, they need time alone or with the guys in order to recharge. Guy time isn’t time away from you; it’s a time when he can scratch, belch, and use crude language and not feel like a disappointment.

6. He loves it when you get along with his friends. It makes it much less stressful when you all get along so making the effort to find a way to connect with them will go a long way. That doesn’t mean that you have to toss back beer and make dirty jokes right along with them, but you can find things in common with almost anyone if you try hard enough.

7. Shared activities form bonds between you. Avoiding sharing those opportunities is missing out on an opportunity to bond. You might never fall in love with his favorite sports team, but making an effort to learn and enjoy the game will help the two of you get closer.

9. Men think about you a lot, and they’re probably fantasies of you in bed. Some of those fantasies may not be your cup of tea, but that’s okay! They’re perfectly content to keep them in their own minds and not act them out, especially since most fantasies require a willing, engaged, and interested participant.

10. Many men need respect more than they do love. Your guy needs to know that you think highly of him. Belittling him in public or dismissing his opinions is the fastest way to cause an argument.

11. Providing for a family is a heavyweight. Even if you’re making as much money as he is, or potentially even more, it’s still a struggle that your guy deals with. He feels that it’s his duty to provide, and he feels inadequate when he’s not.

12. Most men would rather you come straight out what you’re thinking in an honest, forthright way than beat around the bush. They’re not good at subtlety and they hate games.

13. They aren’t interested in the drama in your circle of friends. If you’re mad because so-and-so chose not to sit next to you at that brunch, even though you’d planned it together, you’re probably better off keeping it to yourself.

RELATED ARTICLE: If You Say THIS to Your Partner You’ll Be A Happy Couple GUARANTEED

14. Men like it when you’re romantic, too. They enjoy romance but often worry that they might not be good enough at it. When you take care of the romance, on the other hand, it takes a lot of the pressure off so they can just sit back and enjoy.

15. Guys don’t mind the quiet. The fact that he’s not talking to you doesn’t automatically mean that something is wrong. If he says he’s fine, chances are good he probably is.

Decoding the male mind can be a challenge. The first clue? Most of the time, assume that he means what he says. The second? Don’t assume that he’s mad, that he doesn’t care about you, or that he’s “utterly oblivious” just because he failed to notice something that you did, changed, or otherwise altered. Instead, assume that he’s on your side and that he’s committed to you. That’s the guy you love and that’s the guy he wants to be for you.