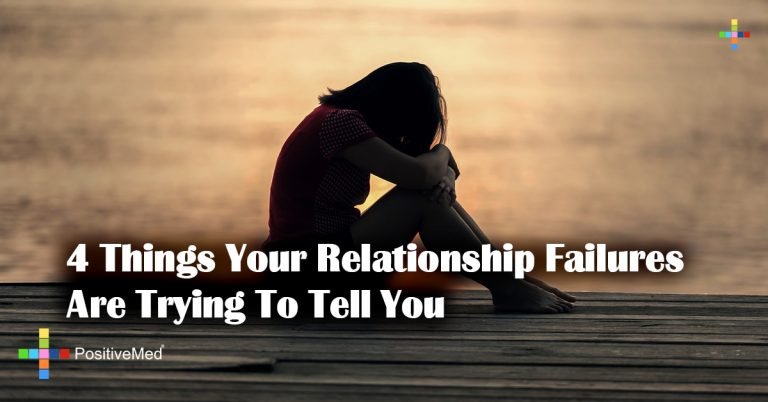 4 Things Your Relationship Failures Are Trying To Tell You

Most of us know at least one person who seems incapable of maintaining a long-term relationship. Partners appear and disappear with amazing regularity and there may be seemingly legitimate reasons for their disappearance. Why do some people always seem to choose the wrong partner? Perhaps the answer lies with the individual rather than the selected partner.

Poor Self Image
Even though a person can be attractive, talented, and personable, he or she may have unresolved issues that prohibit the development of a lasting relationship. My friend, Sally M., lost a child at an early age, which also caused the demise of her first marriage.

Subsequently, this bright, outgoing, and talented woman lost her direction, she had two more failed marriages, several affairs with married men, and numerous short-term relationships. After three years of therapy, she was able to be in a committed relationship without running away at the first sign of difficulty.

Sometimes, an individual will intentionally select a partner who has problems. The rationale is two-fold:
·The other person is defective and I can help fix those defects, therefore, I’m a good person, and
·The other person has defects that are worse than mine so I’m not so bad

Neither rationale is correct but it can falsely build the individual’s self-esteem. Mike C. was an alcoholic who perpetually found fault with his partners, either they were too stupid, too fat, too lazy, or a myriad of other perceived faults. In truth, none of the faults existed, but by assigning them to his partners, he rationalized that the partner needed fixing so his drinking wasn’t so bad.

Unavailable Partners
Many times, individuals will select partners who are unavailable for one or more reasons. The partner can be married, a priest, disinterested, geographically impractical, and so forth. Usually, an individual who consistently selects unavailable partners is also unavailable.

Another rationale for selecting an unavailable partner is the avoidance of reality. It’s easy to fantasize about the partner’s potential and what life would be like if you could change them to what you want them to be. Allen S. fell in love with a woman who was married and had three children. Although she was deeply in love with her husband and devoted to her children, Allen continually fantasized about what his life would be like if she would leave her husband and children and become his. Allen was eventually persuaded to seek professional help and now has a beautiful wife and a family of his own.

RELATED ARTICLE: 7 Red Flags You Need To Pay Attention In Your Relationship

Unrealistic Expectations
The media and social media can provide unrealistic expectations of a relationship. Financial difficulties, work and employment issues, outside influences, and so forth, are glossed over in an hour or less, Coping methods are frequently immature and intended for audience appeal rather than actuality. Minimum-wage earners drive new cars and live in designer homes. Although these are not realistic, they are often the basis for relationship expectations.

Gladys T. has a loving husband who is faithful and adores her. He doesn’t excel at providing her with material possessions like her brothers provide for their wives and she complains often about this. Her husband is brilliant and provides for her to the best of his ability. She, however, is never happy and has never sought professional help. Both of them live their lives in a miserable marriage because neither beliefs in divorce.

Fantasy vs. Fiction
Sometimes, we “fall in love” rather than walking into a relationship with our eyes open. During the initial attraction stages of a relationship, it’s easy to overlook such incompatibilities as religious beliefs, lack of consideration, substance abuse, and so forth, because they may be minimized as an infrequent occurrence.

However, anytime a partner exhibits unacceptable behavior early in the relationship, it’s prudent to take a step back, even if it is a painful step. We all want to think that he or she is “the one” because breakups are painful. Linda D. almost lost her children to the state because her significant other became abusive to both her and the children. His supposedly infrequent drinking binges became daily and both she and her children had to move out of state and get a restraining order against him. Had Linda been more prudent earlier in the relationship, the outcome would have been substantially better for all concerned.

We have all made poor relationship choices at one time or another. However, the better our self-image, the better choices we will make. Whatever it takes to heal and recover from past traumas, it is well worth it in the end. You’ll enjoy your life more and make better choices and be a better partner.