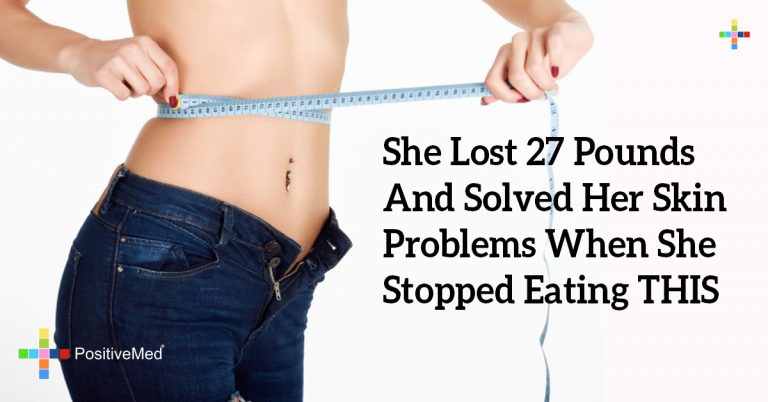 Having skin problems or a bit of extra weight can often be unpleasant, especially if you are a young woman. Though many people think that weight gain might be due to overeating, it can actually be masking serious medical issues. A young mother recently discovered that her medical conditions were causing her to gain weight and have acne, but she was able to change her life just by changing her diet.

Kirsty Huntley is a 32-year-old woman with four children who had recently been having some issues. Her skin was constantly breaking out, and she had gained a couple of pounds that she simply could not get rid of, no matter how much she dieted. The acne did not just affect Kirsty’s face; it was all over her arms, legs, and back. This was a huge blow to her self-confidence and her career. She was a makeup artist, and so she worried that no one would trust her makeup skills if she had bad skin.

It turned out that the acne was actually a symptom of an incredibly rare medical issue, Behçet’s disease. Behçet’s disease is a condition that occurs when blood vessels get inflamed, and the body’s immune system accidentally begins to attack healthy cells. Kirsty tried many different treatments, but nothing could alleviate the symptoms of her condition. In 2013, Kirsty first learned that food allergies could affect her health. After undergoing testing, Kirsty discovered that she was intolerant to gluten, yeast, wheat, coffee, and eggs.

Kirsty decided to experiment with switching her diet up to see if it could help to calm down her Behçet’s disease. She began cutting out all of the food types that triggered her allergies. Within just three months, all of Kirsty’s acne disappeared. In addition to curing some of her symptoms, she also managed to lose weight without any extra effort.

Besides revitalizing her career as a makeup artist, Kirsty now works as a model for alternatively sized women. She has been able to enjoy life instead of stressing about her Behçet’s disease. As Kirsty’s story shows, cutting out food allergens can help to prevent Behçet’s outbreaks, and removing intolerant foods can help people to lose weight and get a better skin for a variety of reasons.

If a person is allergic or intolerant to certain foods, they can stress the digestive and immune system. Since Behçet’s disease is linked to autoimmune disorders, this connection is very important. When a person has a food intolerance, they can eat small amounts of food without having a huge reaction, but their body cannot tolerate eating huge or unlimited amounts of a food that they are intolerant to. Instead of properly digesting the food, the body becomes stressed and treats the food like it is toxic. When the immune system is triggered, an outbreak of Behçet’s can occur. By avoiding foods that she was intolerant too, Kirsty was able to cut down on her likelihood of having a Behçet’s outbreak.

Cutting out foods that the body is intolerant to can have a positive benefit on your weight and overall health. Many people have an intolerance to foods such as wheat or dairy. By avoiding foods that stress the body and picking foods that are easily digestible, you can reach optimum health.