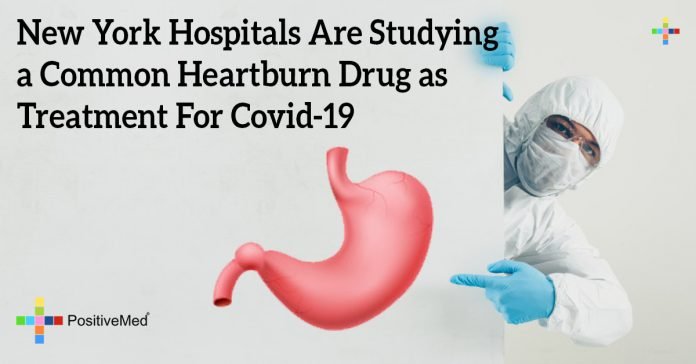 Coronavirus is spreading through the world, and the US is currently particularly touched by it. At what point are we know when it comes to treatment? Are there any new options after the recent revelations? Let’s see what the New York doctors’ idea is.

What happens in Vegas stays in Vegas, but what currently happens in New York, can be sent further, if only it became an effective cure for COVID-19. Hospitals in New York are giving heartburn medicine to coronavirus patients. They want to find out if it helps fight the virus. As dr. Kevin Tracey said on the 27th of April, preliminary results of the clinical trial of famotidine, the active ingredient in Pepcid, will come out in the next few weeks. He is a president of Feinstein Institutes for Medical Research at Northwell Health, which runs 23 hospitals in the New York City area. As for today, 187 patients have enrolled in the clinical trial. Eventually, they hope to enroll 1,200 people in the study.

What if famotidine cures the novel coronavirus? Well, it would be easy to use it on a widespread scale! It’s not only cheap but also accessible to everyone. What if it won’t work? A clinical trial is required to assess whether we may hope that this solution is a good one. It’s worth mentioning that patients in the hospital are getting hyper-doses intravenously, about nine times bigger than standard ones for heartburn. So if you have an idea to go to the drugstore and make your supplies for a DIY cure, don’t bother. It has to be done differently, and the doctor is needed.

Where and when did it all start?

We are learning from the Chinese idea. Famotidine was taken under consideration after it had been noticed that some patients in China who had been taking it, fared better than others. Some people with lower incomes were surviving longer than their wealthier counterparts who also had heartburn. Economically challenged patients were taking famotidine, whereas the wealthier patients tended to take a more expensive drug. The famotidine study was first reported in Science Magazine. Florida-based Alchem Laboratories used a computer model to make a list of existing drugs that might fight coronavirus. Famotidine showed up near the top of the list. Its structure looks like it could stop the virus from replicating.

Hydroxychloroquine is very popular among patients in Northwell. By now, it became standard treatment. The study on hydroxychloroquine started in early April, and all interested sides, i.e. doctors and patients, were insisting on using it. President Trump likes to call it a “game-changer” in the fight against the virus. Unfortunately, recent studies have suggested that it doesn’t help. People get to know from the media that hydroxychloroquine works for treating COVID-19. Then they are faced with the cruel reality of their close ones dying in hospitals, and they demand hydroxychloroquine. Even if the inconvenient truth says that it won’t help, they still need something to give them hope.

Why? The US Food and Drug Administration warned against its use for coronavirus because of possible side effects. As history shows, the rush in introducing new treatments brings more harm than good. Doctors who count on famotidine don’t want that same rush that happened with hydroxychloroquine. The thing with the intravenous famotidine is that it’s unclear if it works, and if a rush starts on the market, hospitals may face shortages, highly inconvenient at this stage of the study. Not to mention, people will rush to stores to buy famotidine pills, mistakenly convinced it will help against coronavirus, leaving those with heartburn in the lurch.