PositiveMed The Positive Side of Medicine
Home Lifestyle Relationship Looking For A Rich Man? 7 Ways To Know If Your Partner Is Going To Be Rich 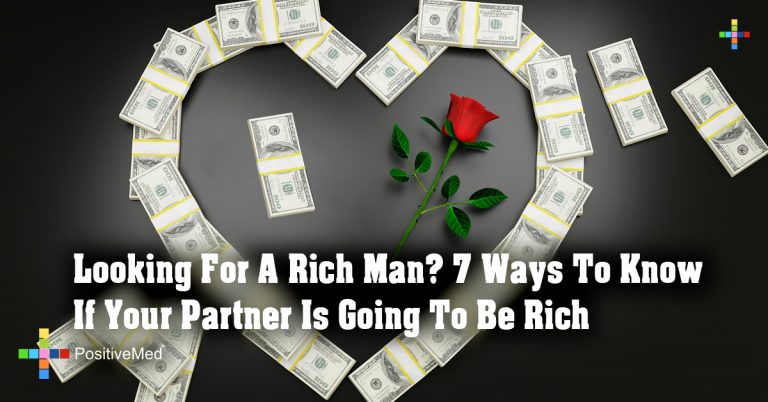 Looking For A Rich Man? 7 Ways To Know If Your Partner Is Going To Be Rich

Of course money isn’t everything, and a relationship should be built on love and trust. However, a bit of extra cash in the bank never hurt anyone, and having a rich boyfriend is certainly preferable to having a deadbeat boyfriend. Here are seven surefire ways to tell if the guy you are seeing in a diamond in the rough with a life of luxury ahead of him, or a dead end low-life without a future.

If your boyfriend has been called “cocky” or “arrogant” then you are in luck- confident people have a better shot at becoming rich. According to Steven Siebold, the author of “How Rich People Think”, it is not that the wealthy think they are better than everyone else, but that they have confidence in their ability to overcome challenges that keeps them moving in a positive direction while others are frozen with fear. So feel free to love him for his cockiness.

Think of all of the super wealthy people you know. Bill Gates. Steve Jobs. Justin Bieber. What do they all have in common? They all had a dream or idea that came to fruition and made them rich. Nobody becomes disgustingly wealthy by working a normal 9 to 5 job. If your boyfriend is always daydreaming about his latest idea, try to encourage it. It could be the crazy idea that leads to spending summers on a yacht in the Caribbean.

RELATED ARTICLE: Ladies, These 5 Body Parts Will Tell You If He Is “The One”

The next characteristic you should be looking for is a willingness to do hard work. All those dreams won’t help him (or you) if he is always dreaming from the couch. If he spends his nights scheming up ways to hustle a little cash and his weekends putting his plans into action, then try not to be upset that he didn’t take you out instead- it might be worth it in a few years.

4. He is financially wise

Sometimes people can grow in this regard so don’t lose hope if your boyfriend is hopeless at money management right now. However, he should understand the value of money and the importance of saving for future expenses. So watch his reaction when he receives a tax return- does he blow it all on drinks at the bar or an Xbox, or put a little into savings or pay down his work truck? If he can be responsible with his dollars now, you can expect him to have more of them later.

Somebody who is well liked by people in general is more likely to become wealthy for two reasons. First, the more friends and contacts he has, the likelier he is to hear about and become involved in a moneymaking venture. When he meets that crucial investor, he can make an impression with his winning personality. Furthermore, the support that a large group of friends and family can provide support when taking risks. The takeaway: try to appreciate his big boisterous family and those wild friends.

6. He is decisive but not impulsive

Rich people become rich by making a series of good choices. Making good choices requires good judgment, which tends to not occur on a whim. However, he is able to make up his mind without waffling and is confident in his choices. Although this trait might be a bummer now, when he doesn’t want to go on a last-minute trip to the lake or buy you that gift “just because,” it will pay off in the end.

7. He is sometimes selfish

Finally, according to recent studies, the wealthy tend to be a little short on compassion and empathy, and may exhibit unethical behavior while pursuing their goals. While this sounds bad, as his girlfriend, you should be able to tell if this potential flaw will be a problem for you or not. Everyone has flaws; it’s up to you to decide if you can love him in spite of his reckless ambition.

While these tips aren’t guaranteed to tell you if your boyfriend will become rich- there is always a chance. Of course don’t go out looking for a wealthy man to love, but if you are lucky maybe that sweet guy you love will get rich after meeting you. After all, according to recent studies most billionaires are self-made.