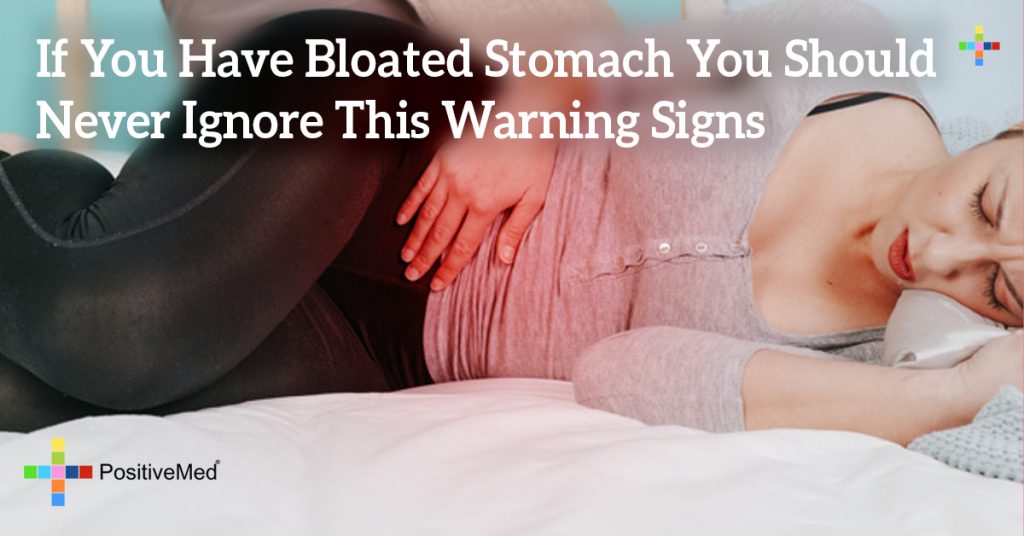 A bloated stomach tends to be uncomfortable and is also sometimes painful. Bloating of the stomach is generally defined as a feeling of excessive fullness and can include tenderness, gaseous feeling, visible swelling, or pain. One might experience flatulence, burping, or abdominal rumbling and gurgling along with bloating. These symptoms can be benign and caused by such actions such as overeating, swallowing excess air, drinking too many carbonated beverages, eating certain vegetables, or lactose intolerance. However, there are cases where abdominal bloating is a sign of a more serious condition.

Liver disease or cirrhosis of the liver can cause the abdomen to be bloated. Caused by either cancer, hepatitis, or heavy alcohol consumption, it is often necessary to have a liver transplant to cure liver disease. Other obvious symptoms of liver disease are a yellowing of the skin or eyes.

Vaginal bleeding or blood in your stool

Both vaginal bleeding or blood in your stool can occur with bloating and should be checked out. Often only a sign that hemorrhoids or fibroids are present, or that menstrual periods are irregular, bleeding can potentially signify cancer or other serious cause.

Any weight loss of more than a few pounds without a significant change in diet can signify cancer, especially when it is associated with abdominal bloating. Weight loss that is more than ten percent of one’s body weight is especially troubling and should be checked out as soon as possible.

Ascites is the accumulation of fluid in the abdominal cavity. It often occurs when the liver is in serious danger of failing. The most obvious symptoms are distension of the abdomen and rapid weight gain as fluid pools. Other than a liver transplant, one of the only treatments is to significantly reduce salt intake.

When bloating occurs with a fever of over 100 degrees Fahrenheit, it most likely indicates infection. Infection can be present in any part of the body but when it occurs with bloating, it is likely urinary, pelvic or a gastroenterologist cause. Infection needs to be cleared up and bloating should also dissipate.

Diverticulitis is inflammation of the diverticulum, generally in the colon, that causes bloating, pain, and fever. Bowel rest with a liquid diet is recommended to reduce the symptoms. After an episode is over, a high fiber diet with plenty of liquids is recommended to keep the fecal matter moving through the bowel normally.

When one of the female reproductive organs, such as the uterine lining, Fallopian tubes, or ovaries, becomes infected, this is called Pelvic inflammatory disease. It can occur because of STD, or it can occur during childbirth, miscarriage, abortion or the insertion of an intrauterine device (IUD). One would feel pain or discomfort along with bloating. A vaginal discharge is a key sign that infection is the issue.

Cancers are a commonly experienced, serious causes of bloating. Cancers, especially those associated with body parts in the abdomen often leave a person to feel over full, full faster than normal, and pelvic pains. Since many cancers do not have other obvious symptoms, one should not ignore bloating that does not subside with a careful diet. Some studies have shown that switching to a vegetarian diet can reduce the risk of some cancers, particularly colon cancer.

Tips to reduce a bloated stomach not caused by another disease

The first step to avoid being bloated is to fend off constipation. This can be accomplished by eating a variety of foods rich in fiber and drinking plenty of water daily. Another useful idea is to avoid carbonated beverages and chewing gum. These items allow extra air to be pushed into your stomach causing it to swell up with air. Another piece of advice to avert a bloating episode is to eat food more slowly and consume less each day. And, while you’re at it, you will want to avoid any foods that you have shown intolerances or allergies to such as dairy products for some people and wheat products for those with celiac disease. And finally, some foods are just more likely to cause gas and bloating. Foods such as beans and certain vegetables like broccoli and Brussels sprouts as well as fried foods should either be avoided totally or eaten in small amounts to let the body adapt to them if they are causing problems. Artificial sugars and sugar alcohols can sometimes also cause a gaseous, bloated feeling in some people.

Additionally, being overweight in general often is a cause of abdominal bloating. This may occur alone or to someone who has gastroesophageal reflux. GERD should be treated since it causes excess swallowing of air when trying to clear the material. Similarly, smoking causes one to swallow excess air and should be avoided.

In the end, abdominal bloating can be caused by a myriad of issues. While bloating does not necessarily indicate a more serious condition, one should not rule out the possibility, especially if other symptoms are present. Do try to alleviate the bloating with avoidance of certain foods and decreasing the excess amounts of air that is swallowed, but if nothing seems work and the bloating continues, seek medical advice for further diagnosis from a professional. The earlier in an illness or disease that a diagnosis occurs, the more likely treatments will be successful in curing the underlying problem.

PrevPreviousThis Woman Mixed Coffee With Eggs. What She Did Next Will Surprise You!
Next25 Ways To Avoid A No Friendly Relation MarriageNext