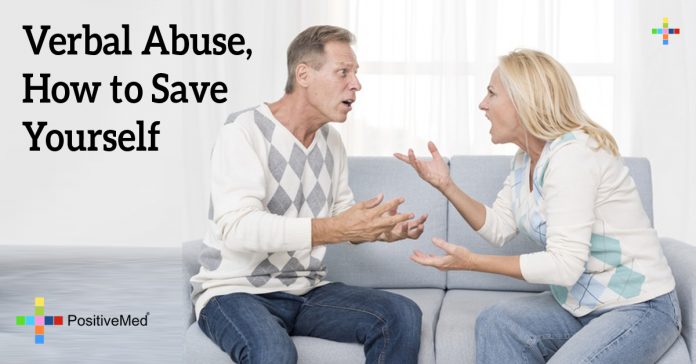 Verbal Abuse, How to Save Yourself
By PositiveMed-Team
Edited By Stephanie Dawson

7 tips everyone who is a victim of verbal abuse can use:

1. Understand the indications of verbal abuse as it happens. It can be bullying, name calling, control, threatening, blaming, and manipulation. Only when you can identify yourself as a victim of verbal abuse will you be able to take steps to defend yourself. Analyze how you feel when verbal abuse happens to use it as a weapon later.

2. Try to avoid the abuser and ignore abuse when it happens. Do not make the abuser feel that you are affected by what is coming out of his mouth. Leave the situation and busy yourself with something else. If you live under one roof go to another room or leave the house for a while. Avoid becoming part of it as it may make the situation worse.

3. Go to your partner and speak to him/her once the things calm down. Tell your partner how you feel when he/she victimizes you with verbal abuse and how it affects you emotionally, mentally, and physically. Make the abuser understand that verbal abuse is inappropriate and you want it stopped immediately. Communicating these things in a calm and relaxed way will be more impactful than confronting in between arguments.

4. Know that the abusive situation is not your fault. It is just a bad habit of your partner and you have got nothing to do with it. Do not let those bad words from the abuser influence you or pull you down. Listen to what your inner self says and do not believe what the abuser says.

5. Another way is trying to convince the abuser to visit a therapist or relationship expert, they specialize in such cases and have techniques to overcome these problems that are more professional and effective. Identify things that give birth to abuse, like alcohol or job stress, and work on helping your partner avoid it.

6. Keep a back-up plan ready. If you have tried everything to stop the verbal abuse and nothing worked you should have a back-up plan. Decide the next step and do it. Think of people you can live with and shift to a friend or relative’s house. Decide what is more important to you, your relationship or your self-respect. If nothing works put an end to the relationship or kick the abuser out of your house.

Bonus point- Verbal abuse generally escalates and becomes more severe as it prolongs and the victim gets adapted to it. Identifying it in early stages and eradicating it right away is important.