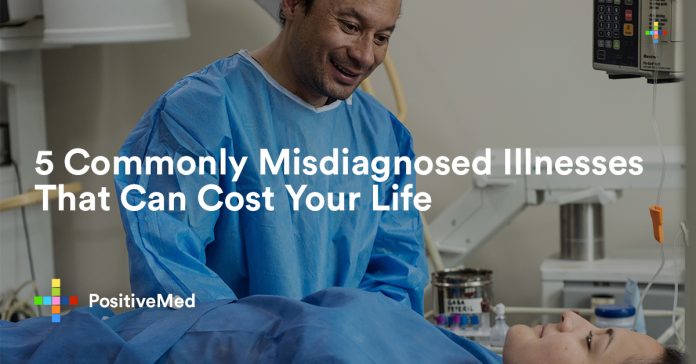 Aches, Twinges, Dizziness, and Fatigue. We’ve all found ourselves dealing with these minor annoyances at one time or another. Seems like no big deal, right? Most likely. However, the commonality of these symptoms can cause doctors to overlook more severe underlying illnesses, leading to misdiagnosis. Below is a list of five commonly misdiagnosed illnesses that can cost your life.

Lyme Disease is a condition resulting from a tick bite, typically causing a bulls-eye shaped rash to form. With such physical evidence, it may seem simple enough to come up with a definite diagnosis, but not everyone develops a rash. As a result, Lyme disease is often mistaken for fibromyalgia, an illness that presents many similar symptoms. Shared symptoms include muscle pain, fatigue, joint pain, and headaches.

There is a blood test that can check for Lyme disease antibodies, but be aware that the results are often inaccurate as said antibodies won’t show up until several weeks after the infection sets in.

Take proactive measures by checking yourself thoroughly, especially if you live in an area where ticks have a prominent population. If you happen to find that you’ve been bitten, remove the parasite immediately and consult your doctor.

Most women can probably say that they’ve experienced an irregular period at one time or another. It’s a fairly common side effect of stress as is weight gain and infertility. However, some women suffering from these symptoms may actually have a hormonal disorder called Polycystic Ovarian Syndrome. An irregular menstrual cycle or a few extra pounds here and there may be considered normal, but if you experience these issues on a near constant basis, talk to your doctor. There are multiple physical and blood tests that can be done to make certain that your symptoms aren’t pointing to something more serious.

To have a headache is to be human. It happens to all of us whether it’s caused by tension, stress, dehydration, or bright light. Also, anyone who’s ever had a sudden drop in blood sugar can tell you that dizzy spells aren’t that uncommon either. The last thing you’d think of when experiencing either of these symptoms is that you might be having a stroke. It sounds extreme, but sometimes a stroke presents itself with these very common complaints.

Strokes are often misdiagnosed as migraines due to the severe headaches, dizziness, and blurred vision that can occur. Johns Hopkins University has done a study that estimates a total of 15-165,000 stroke cases get misdiagnosed each year.

Pay attention to what you’re feeling and tell your doctor everything you can about your symptoms. If you believe that you have more than a simple headache, bring your concerns to your doctor’s attention and ask that they be addressed immediately.

The National Ovarian Cancer Coalition (NOCC) conducted a survey of women fighting ovarian cancer, and the results are astounding. Over 65% of these women were misdiagnosed by their doctors when they first started experiencing problems. Ovarian cancer symptoms include abdominal pain, bloating, and cramping, signs that often lead doctors to diagnose irritable bowl syndrome or a urinary tract infection.

The level of misdiagnosed illnesses is unfortunate as relatively inexpensive testing can determine a more definitive diagnosis. If you’re experiencing any of the symptoms listed above, especially over an extended period of time, request that your doctor run some tests to rule out ovarian cancer.

Ever had a panic attack? If so, you know to expect shortness of breath, a pounding heart, and sometimes chest pains. The same could be said of a pulmonary embolism, which is why it can often be misdiagnosed.

A pulmonary embolism is basically a clot that, in most cases, travels from your legs to your lungs and can be life-threatening. It is more likely to occur if you take birth control, have experienced a long period of immobility either because of surgery or pregnancy, or if you smoke.

Panic attacks usually also include shaking, tingling hands, and an intense feeling of terror. Pulmonary embolisms typically present themselves in a more subtle manner, which is important to keep in mind if you experience any of its symptoms.

With medical technology being what it is today, it feels like misdiagnosis should be an uncommon occurrence. However, doctors tend to lean towards what is more likely when assessing your symptoms, and when certain complaints can cover a range of illnesses, a definitive diagnosis can take time. If you feel that something isn’t right, be persistent. You know your body better than anyone.

Have you ever had an experience in which you had misdiagnosed illnesses? How did you and your doctor get to the bottom of your illness?