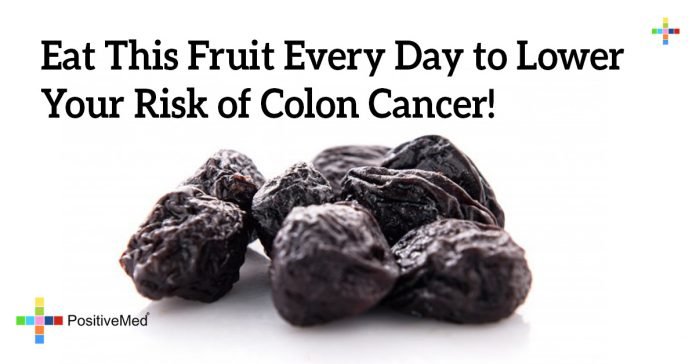 Findings presented at the 2015 Experimental Biology Conference linked prune consumption to a decreased risk of developing colon cancer. The study presented at the conference found that prunes could promote retention of beneficial microbiota, more commonly called gut bacteria. The microbiota of rats fed a prune containing diet had increased Bacteroidetes and reduced Firmicutes. The balance of these two major groups of the microbiota is important to colon health. The prune diet intestines also showed significantly less aberrant crypts foci (ACF). This ACF is abnormal lesions that can indicate cancer development.

Previous studies have similarly concluded that a prune containing diet favorably alters colon activity and that prunes could be key to lowering the risk of colon cancer.

RELATED ARTICLE: He Ran Away from Home 20 Years Ago to Avoid Chemo and He’s Still…

Much research has already shown that diet affects the trillions of bacteria in the digestive tract, and prunes aren’t new to the spotlight. Prunes have long been famed as a digestive remedy among other things. Despite the potential health benefits, prunes don’t have a great reputation. Consumer research found that 90% of people would enjoy the snack more if it were called “dried plums” instead of prunes. In 2000, the California Prune Board urged the Food and Drug Administration to rebrand prunes as “dried plums”.

Approximately five dried plums constitute a serving. Dried plums can be enjoyed on their own or added to any number of culinary creations. The California Dried Plums Board website has several recipes from savory to sweet, so they’re easy to work into any diet.

But why does it have to be dried? If a prune is a dried plum then couldn’t the same health benefits be expected from a plum? The answer is in the drying process. A dried plum has more sorbitol than its fresh counterpart. This sorbitol is what increases the levels of beneficial microbiota.

The ability of prunes, or rather dried plums, to reduce the risk of colon cancer is still being studied. More testing, including testing on human subjects, is needed to confirm all the potential health benefits. The results so far are promising, and because there are no contraindications there’s no reason not to indulge!