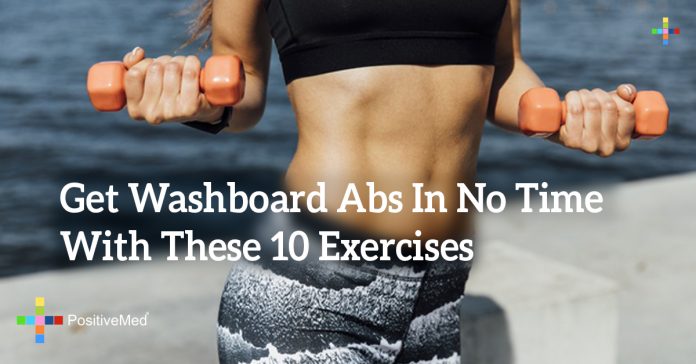 Get Washboard Abs In No Time With These 10 Exercises

Washboard abs can be attained by adopting two major undertakings: diet and training. Some people will achieve the rippling midsection look faster than others thanks to their genes, but anyone can strengthen their abdominal muscles with the following ten exercises:

This is one of the most underrated routines in the history of physical fitness, but any personal trainer or physiologist will tell you that the posture attained by strengthening glutes and quads has an intrinsic effect on the abs. There are two steps: the first involves standing straight with feet lined up with shoulder and arms pointed forward and parallel to the floor, and the second step involves lowering the hips until thighs are parallel to the floor.

This is an excellent core exercise that really challenges abdominal muscles. This exercise starts by lying flat on the floor with arms over the head. After a 45-degree leg raise, head and shoulders must be lifted as the arms are brought forward in an attempt to reach the knees.

This exercise requires two small towels. It begins in the push-up position with each foot resting on a towel. One knee is brought forward towards the chest while the foot slides on the floor. After a second, the foot returns to the starting position so that the exercise continues with the other knee.

This stretching exercise begins on the floor. While lying face down, the knees bend so that the ankles can be held in each hand. The idea is to keep the knees apart while pushing the feet back and lifting the chest off the ground. This pose should be held while breathing deeply three times.

This modified yoga pose starts with feet together and arms straight above the head. Taking one step to the side, the hips should be lowered by flexing the knee of the stepping leg while keeping the other leg straight. Then, both arms should be brought down towards the stepping foot. The step foot should be alternated after returning to the standing position.

Using the lower pulley of a cable machine, the body is placed into a side plank position while using the forearm for support. The handle should be grabbed with the free hand and the arm extended before moving the elbow towards the back, squeezing the abs and pulling to the side.

This is a modified plank with three stages. It starts with a forearm-resting plank and feet together. Moving one arm towards the ceiling, the knees and hips should be slowly moved to the side. Then, one foot is placed above the other while resting on the opposite elbow and before alternating.

RELATED ARTICLE: Tone Your Abs With This 10-Minute Dance Workout

This exercise requires a Pilates ball under the heels while lying down. With arms raised high and palms facing each other, the feet press the ball while the arms move forward and the shoulders are lifted. The idea is to try to reach the feet.

This exercise requires a calisthenics bar, which should be held high above one shoulder with both hands. The upper body twists until one end of the bar point forward. This movement focuses on the obliques.

Tell us what you think. Do you agree are these the best ab exercises? Do you know any other exercises for killer abs?