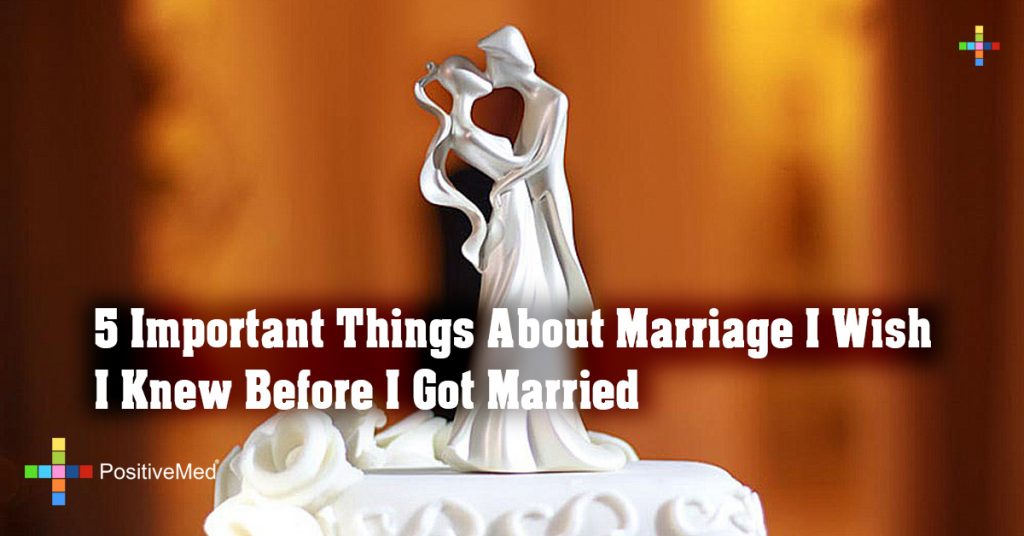 We’ve just celebrated our 22nd anniversary. In the Midtown United States, that’s almost a miracle. We’re getting to that stage where new acquaintances drop their jaw in shock when we tell them. After all, 42% of marriages in the US end in divorce, according to a 2013 report.

Through all the best and worst, these are the five things we’ve decided would have been nicer to know going forward, because we had to learn them the hard way:

Want to get married? But you want to wait until you can afford this big, splashy affair and invite everybody. Time to start a family? But you want to wait until you’re better situated financially. Forget to wait for big life events: Once you’re sure you’re not making a mistake, you should go for it. After all that agonizing over just the right time, the truth is you’ll always feel like you jumped in too soon.

RELATED ARTICLE: 4 Proven Hacks to Improve Your Marriage In an Instant!

Not to sound bitter, but we got scammed more in the first five years of our lives together than at any time before or since. We took on debts we couldn’t afford, made dumb decisions while being pressured by salesmen, and got hooked and given bad advice by just about every expert we turned to. We blew thousands of dollars making ill-informed decisions that we regretted later. Young adults in love radiate a happy, blissed-out glow and are more likely to make optimistic decisions that turn sour. Being madly in love is just like being drunk; think twice before you make decisions in this state.

#3: If you have relatives that can’t stand your happy marriage, show them the door.

It would be nice if everyone observed “speak now, or forever hold your peace.” Both of us have relatives that, for reasons arcane and baffling, simply cannot stand our marriage and family. We put up with these toxic people for years, patiently withstanding their attempts to claw us apart. In the end, we suffered all the flak and fighting and ended up simply telling them to mind their own business or stay out of our lives. We were all immediately happy.

Problems we didn’t know the cause of suddenly cleared up. Remember, anybody who wants to disrupt a happy marriage has only their own selfish motives at stake, and toxic relatives are the poison at every family dinner table.

#4: Nobody’s great at everything; combine your powers.

Early on, we were each determined to shoulder 75% of the burden. “No, don’t get up, honey, I’ve got that.” then after a while that got old, and each of us were trying to shoulder 25% of the burden: “When is your turn to do laundry?” What works, is to fairly divide the responsibility between each of you, parceling out what each person is good at. If one is the breadwinner, the other has to be the homemaker. Let the math whiz handle the accounting, taxes, and bills. Let the artistic genius handle the cooking and decorating. Let the wise Zen monk raise the kids, and the green thumb raise the plants. If you combine your powers right, there’s a superhero between you.

The first night you were together, you stayed up in bed talking until dawn. There was nobody else in the world but each other, and all the time in the world. As you form a marriage and the years grind by, the whole world becomes a big conspiracy to prevent you from ever experiencing that moment again. At some point, we got tired of barely having the time for five words to each other during the week and put our foot down. We set a schedule and at that time every day, march to our room and close the door. For ten glorious minutes every day, we just lay in bed talking to each other; phones off, laptops off, no noise, let the kids pound on the door. The world will not burn down while you sit in your room for ten minutes and have a conversation. We have to say this rule, above all, is the one worth keeping sacred.

The 21st century is riddled with demands for every minute of the day. You have to demand private time for just you two, free of distractions. For cuddling, talking, venting, or just staring at the ceiling and being useless. Put the world on time out every day, or it will think itself too important.

Is there something hard about marriage? Apparently so; since one in five Americans have never married by age 25, according to a 2014 survey. Marriage takes work, from two people who care to make it grow. But if you put in the effort, the reward is a love that grows each year, a precious jewel that will become the most important thing you’ve achieved in your life.

PrevPreviousWhy Our Bodies Redistribute Fat as We Age, and How to Prevent It
NextThis Young Woman Beat The Odds After Being Told She Would Never SpeakNext