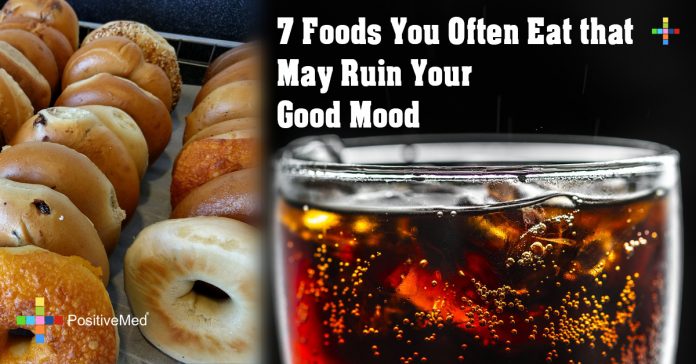 7 Foods You Often Eat that May Ruin Your Good Mood

Believe it or not, research shows a link between certain foods and the onset of bad moods. Read through this list to find out which of your favorite dishes and ingredients may be affecting your spirits, and consequently, your health!

1. Hydrogenated Oils
These highly processed oils are used as a food preserver to extend the shelf life of many products by several months. Unfortunately these oils create trans fats in foods, which are the absolutely worst fats you can consume since they raise cholesterol levels and make the body work overtime just to digest them. They are also known to create brain fog and increase moodiness.

2. Bagels
How, you ask? Well, initially a bagel will boost a person’s energy levels. Unfortunately, this will be followed by a crash a few hours later, and you’re left in search of another sugar high to combat the low feelings. These crashes can cause lightheadedness in addition to feelings of irritability and sadness.

3. Soda
Not only does sugar make you fat (and increase your likelihood of developing a mental illness), but it also can decrease brain volume as the result of long-term obesity and diabetes. Soda is one of the worst sugar offenders, even though it continues to be wildly popular among Americans. In fact, the average person drinks about 600 cans of this mood-decliners each year.

4. Food Dye FD&C Red 40
This is one of the most commonly used edible dyes. Though it enhances the color and appearance of food, it adds absolutely nothing to the flavor. This additive, which has been known to cause hypersensitivity and/or ADHD in adults and children alike, can be found in everything from fruit drinks and cereal, to over-the-counter medications, sports drinks, and sodas (that’s two strikes for sodas!).

5. Monosodium Glutamate
Monosodium Glutamate, or MSGs, are flavor-enhancers commonly added to pre-packaged foods. Like hydrogenated oils, they are also sometimes used for increasing a product’s shelf life by up to several months. MSGs can be found in items such as Hamburger Helper boxed meals, potato chips, many frozen meals, packaged nuts, soups, seasonings such as seasoned salt, and in many “ethnic” foods such as Chinese noodles and sauces, and Spanish foods.

Even a small amount of MSGs can cause lightheadedness, nausea, weakness, and overwhelming feelings of anxiety. These MSGs are not required by the FDA to be listed on food labels, so watch carefully for these common offenders.

6. Deli Meat
While it isn’t fair to label all deli meats under this list, the majority of luncheon meat purchased in local delis have been highly processed. Their link to bad moods comes from the artificial food colors which are used during processing. Many of these food colors develop from petrochemicals, which are known to be linked to mood disorders.

7. Aspastame
This artificial sweetener used in diet sodas has been associated with a host of upsetting symptoms, including seizures, headaches, and weight gain. Besides that, it has been proven to be a dangerous and extremely toxic chemical that should be avoided whenever possible.

RELATED ARTICLE: Foods That Are Guaranteed To Make You Happy

Conclusion
It may be surprising to find that so many foods and ingredients can be affiliated with bad moods and irregular mood swings. Luckily, there are several other foods and eating habits that can boost your mood and overall health. To ward off irritability and moodiness, eat adequate amounts of protein, healthy vitamins, and fiber. Also, make sure to eat often, never skip meals, and remember this list of foods to avoid!