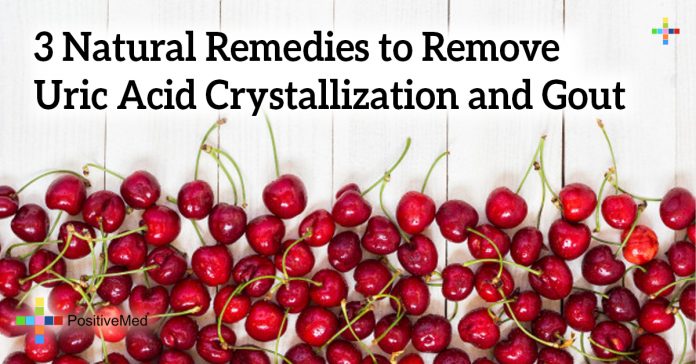 Joint pain can have a variety of causes and affects many people. The usual wear and tear of age can play a large part in how the joints work. However, some joint pain has an alternative cause. Uric acid is present in the body of every living person. Most people maintain acceptable levels of uric acid, or excrete any excess acid during urination. However, advanced age, poor diet, or other health concerns may cause uric acid to build up in the body which can cause serious health issues, the least of which is severe joint inflammation and pain. When inflammation in the joints is localized to one or two areas and is extremely painful, the person is said to be experiencing the symptoms of gout. Gout occurs when uric acid crystallizes in the space between the joints and causes friction and damage to the joints as they make ordinary movements.

Though terribly painful and debilitating, the effects of uric acid accumulation and gout do not have to become a permanent part of a sufferer’s life. There are natural remedies that allow for the dissolution of crystallized uric acid, and its safe excretion during urination. The three most effective remedies are detailed below.

#1 – Hydrate!
It may seem overly simple, but just drinking enough water can help to prevent the accumulation of uric acid crystals in the joints. Uric acid is typically kept at manageable levels in the body because the majority of it is passed through urination. However when a person is not adequately hydrated, they may not urinate as often, which allows the uric acid to remain in the body longer than it should. When allowed to settle, uric acid begins the crystallization process which affects many of the body’s systems including proper function of the joints. To prevent dehydration, a person should drink an amount of water appropriate to his or her body weight. A healthcare professional or even internet resources can be helpful in determining how much water is the right amount.

#3 – Cucumber juice
Cucumber juice is an excellent remedy for uric acid crystal accumulation. Cucumbers are readily available in any grocery store or farmers market, and are even relatively easy to grow in a small backyard or patio garden. Juicing fresh cucumbers is the best option for any medicinal use, however for those who cannot be bothered, many health food stores have also begun to carry juices that feature cucumbers predominantly. Working in much the same way as tart cherry juice, enzymes in cucumbers break up uric acid crystals and allow them to easily pass through urination. Juicing cucumbers is more effective than simply eating them because more of the enzymes and nutrients will be present in less volume.

Joint pain does not have to be permanent! Anyone suffering from ill health related to the accumulation of uric acid or gout can find relief by adding these simple natural remedies to their diet.