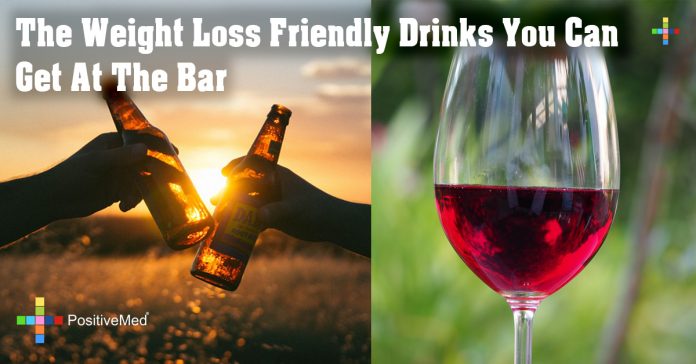 The Weight Loss Friendly Drinks You Can Get At The Bar

So you finally got that match on Tinder. Days of swiping left with the occasional right that makes you swell with the eager anticipation of meeting who could be your potential soulmate finally resulted in a conversation longer than 10 messages. And here you are. The bar is packed, music is good and your date is surprisingly more attractive than the three pictures they had on their profile, which you scrutinized thoroughly before tonight. But now you have an entirely different obstacle up ahead. Not only do you want to order something that makes you look like you know your drinks and impress your date, but you also want something that won’t pack on a bunch of extra calories. You’re just getting into shape, and while kicking back a few bottles would undoubtedly make this whole diet business a heck of a lot more enjoyable, you know it would only be a set back. So what can you do?

Well lucky for you, we’ve been there. Hopefully so you don’t have to be, because nothing can make you feel quite as pretentious when you’re hanging out with friends as asking the 20-something working the bar how many calories are in a gin and tonic. Now it is true that alcohol may actually have some health benefits you didn’t know of. Doctors found that consuming a small amount of red wine daily actually decreased the risk of cardiovascular disease, while one Archives of Internal Medicine study revealed that people who drink one or two alcoholic beverages a day are less likely to put on weight. Of course, this may be a myth given the fact most men know all to well the crushing (or flopping) reality of the beer belly. The American Journal of Clinical Nutrition found men consume at least an extra 433 calories on the days they drink, and I think we can agree that on game nights or those weekend hangouts with friends, 433 is just the sad beginning that spirals into the pits of grease-laden, bitter-tasting despair. What did you even eat at the bar last night? Those stories about you scarfing down 20 wings has to be your friends messing with you…right? And the sauce stains on your shirt? Mere circumstantial evidence. So here’s the skinny on what drinks to order when you’re dieting or attempting to stick to your New Year’s Resolution to be healthy for longer than New Year’s Day. The best and worst alcoholic drinks to keep in mind the next time you hit the town.

Wine: As mentioned earlier, wine actually does good for your heart, not just your soul (although we can all agree this is true). 5 ounces of red wine has only 100 calories and 2 grams of carbs. The alcoholic content can vary, but the median is 12 percent.

Vermouth: Hard liquors like Vermouth are often mixed with soda or other high-calorie liquids, so if you’re going this route, then make sure you swap the Cola for a diet or some tonic water. A 1.5 ounce serving of Vermouth has 64 calories and 0.4 gram of carbs, so feel free to take back a shot or two. Be careful though. The aromatized wine is usually bottled at 16 to 18 percent ABV.

Straight Liquors: It may not taste the best, but if you’re insistent upon drinking and want the healthiest choice, a shot of straight liquor served neat is your best option. One serving of vodka has just 97 calories and zero carbs, while gin has 110 and no carbs. If you want to keep this number, avoid mixers and take your drink on the rocks. A straight liquor is usually served as a double shot, and with vodka clocked in at 37 to 40 percent alcohol, make sure you don’t take more than a serving and drink responsibly.

Light Beer: Keep in mind that a light beer doesn’t do you any good if you drink double what you normally would. The alcoholic content of a bottle of light versus regular beer is small (4.5 and 5 percent respectively). Calorie differences vary, with not much more than 35 calories being spared between servings, but a bottle of light beer contains far fewer calories than their regular counterparts.

Sugar-Packed Cocktails:  Anything with a mixer should be avoided if you are dieting. Most of the cocktails on the drink menu are loaded with sugar. A piña colada has a whopping 35 grams of sugar and potentially more calories than a Big Mac. In addition to sugar, a frozen margaritas will run you 500 to 700 calories in just one drink. Sangria may seem healthier, but one 8.5 ounce glass of the red wine and fruit is loaded with additional sweeteners and 150 calories can also be accompanied by upwards of 16 grams of sugar.

High-Alcohol Craft Beers:  Straight beers have an alcohol content of 12 percent or higher, usually 16 to 18 percent. They also bring a lot of unnecessary calories and carbohydrates with them. A 12 ounce bottle packs at least 330 calories, and just a 6 ounce glass of some brews has a staggering 550 calories – 50 more than a large order of fries at McDonald’s.

Finding the Balance
Drinking healthily or for the sake of a diet is about finding an equilibrium between the least amount of calories, carbs, sugar and taste. It requires a bit of taste-testing, but hey, since when has going out for a couple of drinks sounded like a chore? Of course, make sure to drink responsibly. A night of debauchery can quickly turn south when “just one more” drink lands you in the hospital with alcohol poisoning.

Just take a breath, have fun and know that drinking healthy doesn’t have to equal poorly. The next time you order something new off the menu, just count it as another fun experience to add to your night.