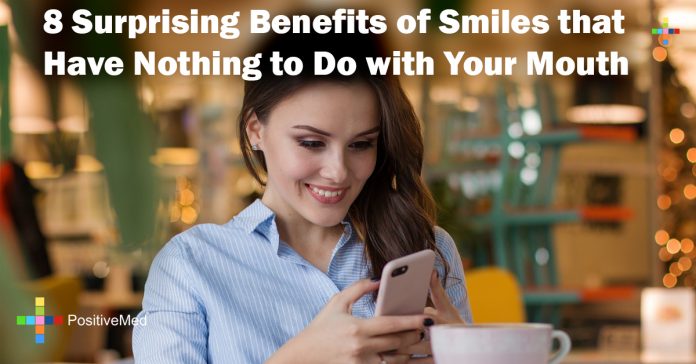 “A smile is a curve that sets everything straight,” said American stand-up comedian Phyllis Diller. And it looks like she’s right. We know for a fact that smiling can make you look more attractive, as actual scientific studies have shown in the past. However, smiles can provide you more benefits than you probably thought possible. Here’s a rundown of eight of them.

You make yourself look more approachable

Smiling makes you look more friendly and approachable, so you are more likely to be engaged by people if you have a happy face. Take note, however, that a majority of people can actually spot a fake smile. As it turns out, genuine smiles don’t only affect the appearance of the mouth, as is the case with most fake smiles. They also cause other facial muscles to crumple up more, particularly those surrounding the eyes. This is according to University of Hertfordshire psychologist Richard Wiseman, who conducted studies about fake and genuine smiles. So if people had told you in the past that your eyes light up when you smile, then you were most likely flashing them honest-to-goodness smiles. Good for you!

You can make other people happy with your smile

Smiles are contagious. According to a study by the Department of Neuroradiology of the University of Tübingen in Germany, what people perceive from other people’s emotionally expressive countenance can have a direct effect on the facial reaction of the viewers themselves. When you smile, it activates a complex response in the brain of other people, a process that stimulates them to act in kind. In short, smiles are contagious, so when you show them a happy face, you can actually make them happy, too.

Did you know that when you are doing a tense or demanding activity, smiling can help reduce the stress you are feeling in addition to lowering your heart rate? A study by the University of Kansas’ Department of Psychology revealed that smiling has both physiological and psychological benefits to people when they are going through stressful situations.

Smiling releases the feel-good neurotransmitter serotonin, which serves as an antidepressant and helps lift people’s mood. If you are feeling down or depressed lately, remember to smile. It can make you feel happier without the side effects of antidepressant drugs.

Smiles can help with your pain

Smiling can also trigger the release of endorphins, another feel-good neurotransmitter, which is a natural painkiller.

Smiling could help you find love

Correlation doesn’t necessarily mean causation, but in one study published in 2009 by the journal Motivation and Emotion, researchers discovered that people who had more intense smiles in their childhood photos were less likely to be divorced when they were older. The scientists hypothesize that positive emotionality and a sunny disposition can have a beneficial impact on people’s lives.

A study by a hospital in Hungary revealed that sick children who were visited by puppetry artists produced higher levels of blood lymphocyte, a type of white blood cell that plays an important role in defending the body against diseases. This suggests that positive immunological changes may be experienced by people if they are given more attention and more reasons to smile.

Put on a smile, and you’ll look more trustworthy

Various studies, like those conducted by the New York University and by University of Pittsburgh’s Department of Oral Biology, have revealed that the intensity of people’s smiles is linked with positive judgment on those people’s trustworthiness. A word of advice, though: aside from smiling broadly, also be genuinely trustworthy to have a better shot at building and nurturing your relationships.

Considering it really doesn’t take that much to activate that primeval program in our brain that makes us happier, less stressed, and look more attractive, one should wonder why people aren’t smiling more often. It only takes a split second to contract those facial muscles you use for smiling, so by all means, smile as much as you can!

David S. Frey, DDS is a cosmetic dentist with 20 years of professional experience. He is one of the most trusted names in cosmetic and restorative dentistry in California’s Beverly Hills area. Dr. Frey also writes for his own blog where you can find tips on oral health care.