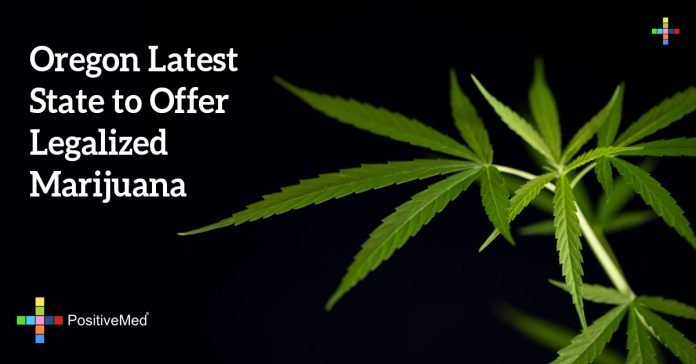 Almost half, 23 to be exact, US states have legalized some form of legal marijuana usage, Oregon became the latest on July 1, 2015, following a vote last November. Oregon has some of the least restrictive laws in the nation so far, and joins Alaska, Colorado, the District of Columbia, and Washington by allowing recreational use, not just medical.

Almost every state has had in the past, or has on an upcoming ballot, or both, an interest in legalizing marijuana, for medical and recreational use. Some states are quite strict with medical use, others are more free in their rulings. Medical marijuana has shown success in treatment of symptoms of HIV/AIDS, migraines, glaucoma, multiple sclerosis, Parkinson’s disease, high blood pressure, neuropathy, fibromyalgia, Tourette’s syndrome, anorexia, Huntington’s disease, epilepsy, spinal cord injury, cancer pain, nausea/vomiting related to chemotherapy, nausea/vomiting in general, and numerous other disorders. Many people find it beneficial for depression and anxiety and as an appetite stimulant.

The federal government still bans any use of marijuana, because of that, if you are over 21 and visiting Oregon it is completely legal for you to smoke up, if you leave the state you cannot take it with you, even to neighboring Washington, where it’s also legal, because that is taking a substance over state lines.

You will not be able to smoke or use marijuana in public places, and right now there is no place to buy it. Public use is a misdemeanor, but can come with a fairly large fine, up to $1000. There are medical shops set up, but nothing yet for the general public, that should happen by next year, and lawmakers are hoping to push it through as soon as October of this year. It’s not yet legal to sell, but each person may have up to 4 mature plants at any given time, if someone gifts you with seeds. Some places are giving away weed right now, as part of the celebration.

State revenue in Washington and Colorado, combined, is estimated to be around $800 million by 2020 from marijuana sales, that is a lot of money in the government coffers. There are a lot of opinions, positive and negative, about recreational marijuana usage, after all, many are not even comfortable with medical use even though it’s effectiveness has been proved many times over. Someday maybe it will lose it’s stigma, and people can reap the many benefits of the whole plant.