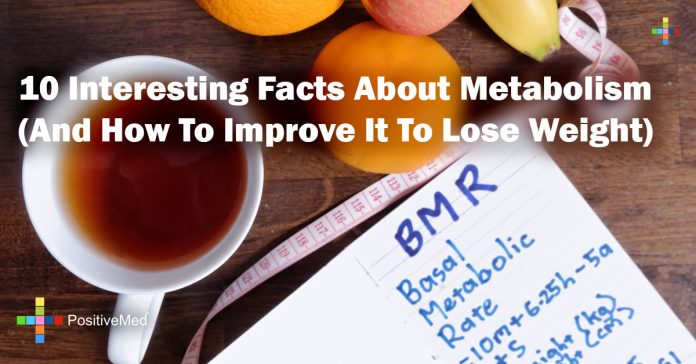 If you’re carrying some extra pounds and having a hard time losing them, a sluggish metabolism could be one of the reasons why.
Here are the 10 interesting facts about metabolism that will help you understand it better, plus find ways to improve it.

Basal metabolic rate (BMR) accounts for up to 70% of your total energy expenditure.

BMR is the rate at which the body uses energy while at rest, to sustain basic life processes, such as breathing, heartbeat, and circulation.

Physical activity (or exercise) only accounts for about 20% of total energy expenditure (although could be up to 50% in a very physically active person, and even less than 20% in a sedentary person), and the thermic effect of food (or diet-induced thermogenesis) – 10%.

So the BMR is responsible for most of your energy expenditure, therefore by increasing your BMR you can burn a lot more calories even when you’re resting!

Your metabolism is not predestined by your genes.
Yes, your genetics may influence it. But usually its people’s lifestyle and dietary choices that are making them fat, not the genetics.

Studies  with identical twins have confirmed that environmental factors and habits lead to different weight gain, independent of genetic background.
So even if you’re genetically predisposed to carry extra fat, you can take action, like exercising and eating healthily and influence your gene expression and metabolism.

It is common to see people who complain about their slow metabolism eat unhealthy foods or overeat and/or lead a sedentary lifestyle. I have definitely been guilty of that! I used to blame my so-called “fat genes” for not being able to lose weight. But when I got honest with myself, I admitted the fact that it was all that chocolate, bread, cheese, ice cream and fried food that was causing my excess weight. When I got rid of my belief that being fat was in my genes, I changed my eating habits and lifestyle and lost 40 lbs. of fat as a result.

Very low calorie diets can backfire.
You might read about celebrities putting themselves through crazy crash diets in order to shed pounds before a big movie role or Hollywood event.

Our bodies are smart and programmed for survival. Severely limiting calories can make your body think it’s entering a famine, and that it needs to conserve energy, thus the metabolism slows down.

Having more muscle speeds up the metabolism.
Lean body tissue or muscle is more ‘metabolically active’ than fat, which means it burns more energy, even when you’re resting. Metabolic activity of muscle accounts for about 25% of total energy expenditure compared to fat at only 5%.

This is why men, who naturally have a higher ratio of muscle to fat, tend to burn up what they eat faster. Although a fat man may have a slower metabolism than a slim woman with more muscle tissue.

Some women are afraid to lift weights because they’re afraid they might get big and bulky, but this is impossible for women to achieve, unless they supplement with hormones. Women simply don’t have enough testosterone to build huge muscles naturally. So by lifting heavier weights you will not only look more toned but will also increase your metabolism.

Metabolism slows down slightly with age.
This happens as a result of us having less muscle tissue as we get older, as per the previous fact. However, this can be avoided by regularly doing strength training!

It takes only 30 minutes in any fixed position to inhibit your metabolism.
The study shows that prolonged sitting impedes the ability to metabolize fat and sugar and it also elevates triglycerides, potentially raising the risk for cardiovascular disease. It also weakens muscles, which can lead to back pain, arthritis, and joint problems. $e* hormones, including estrogen and testosterone metabolism, also are affected.

So if you work at a computer, get up every 30 minutes, do some jumping jacks, lunges, stretching or just simply walk. You may also consider putting your computer on a filing cabinet and doing some work while standing. You may also schedule a walking meeting instead of a boardroom, which will add some movement to a day.

Lack of sleep slows down metabolism.
When people are sleep deprived they move less the next day, which means they burn fewer calories. But it gets worse: according to a study insufficient sleep increases the risk for insulin resistance, type 2 diabetes, and obesity (all metabolism crashers!). So aim for 7-9 hours of sleep per night.

One more study showed that sleep deprivation not only increases the appetite but also reduces the amount of energy your body uses at rest, thus slowing the basal metabolic rate and increasing the risk of weight gain twofold.

Dehydration makes your metabolism sluggish.
All of your body’s cellular processes, including metabolism and energy production, depend on water.
A study has confirmed that drinking water indeed has a positive effect on metabolic rate.

HIIT (high intensity interval training) can help you burn 190 extra calories while resting!
HIIT is a form of cardio training that involves cycles of high-intensity bursts and low to moderate intensity recovery.

It not only burns a lot of calories while exercising, but the study shows that a 45-minute vigorous workout makes your body burn up to 190 calories in the next 14 hours after exercising. That’s a huge increase!

Vigorous high-intensity exercise also leads to increased production of HGH (human growth hormone) which is vital to muscle growth. As already discussed, muscle is important to your metabolism and overall health.

If you have not exercised intensely for a long time, or suffer from any medical conditions, it is advisable to consult your doctor before starting a vigorous exercise program.

Here’s how you can apply this information to speed up your metabolism:

• Exercise regularly and include HIIT (high-intensity interval training).
• Include strength training to build muscle.
• Eat at the same time each day.
• Have enough sleep (for most adults it’s 7-8 hours per night).
• Hydrate your body by drinking water and eating lots of high-water-content fruits and vegetables.
• Don’t stay in one position for too long! Move your body!

Osha Key is a life lover, certified nutritionist, weight loss expert, the creator of the Lovetarian Detox and founder of becomethebestofyou.com. After losing 40 pounds, Osha is now on a mission to help women do the same. In her FREE Weight Loss Video Training series at lovetariandetox.com, Osha teaches everything that has helped her lose 40 pounds of fat and keep it off.