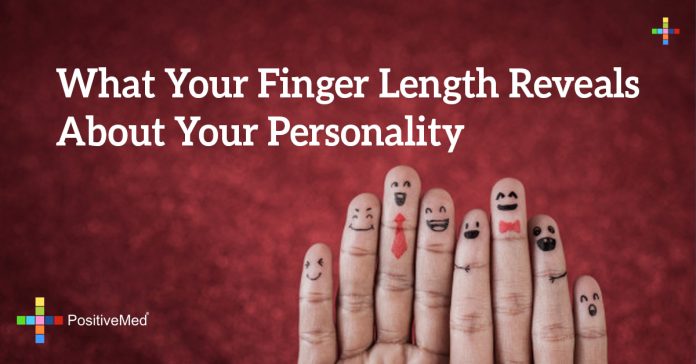 What Your Finger Length Reveals About Your Personality

Although the human animal is far too complex to be reduced to a single characteristic, there are definitely trends that can be noted. One such trend has to do with certain physical characteristics and personality traits. Did you know that your finger length can describe your personality with astonishing accuracy?

The Science Behind Finger Length

Studies have shown that people with a longer ring finger than index finger are exposed to more testosterone in the womb as a fetus. Testosterone, for both men and women, is the chemical that corresponds to aggression. However, it is also associated with other aspects of health such as susceptibility to disease as well as socioeconomics such as success at the workplace.

have more testosterone. This equates to a more aggressive personality in life, which in turn equates to higher rates of success. Colloquially, aggressive personality relates to “charm” in many of the scientific studies that have tried to quantify certain personality traits. Individuals with this type of personality tend to become soldiers, engineers and executives. Even women with longer ring fingers tend to do better in the corporate workplace even though testosterone is not normally associated with women.

People who have longer index fingers

tend to have a more introverted personality. They are described as self-confidence; however, they may not showcase this element of their personality in the same way that a “Type A” personality would do so. People with this type of personality tend to do better in jobs that require a great deal of time alone such as individualized stock market trading or affiliate marketing.

showcase the same kind of balance in life as well. These kinds of people tend to avoid confrontation and have been shown to be more faithful in relationships. However, there are many other factors that dictate the overall personality that a person may showcase to the world. Do not think that you can simply look at someone’s finger length and determine what they will do in a certain situation!