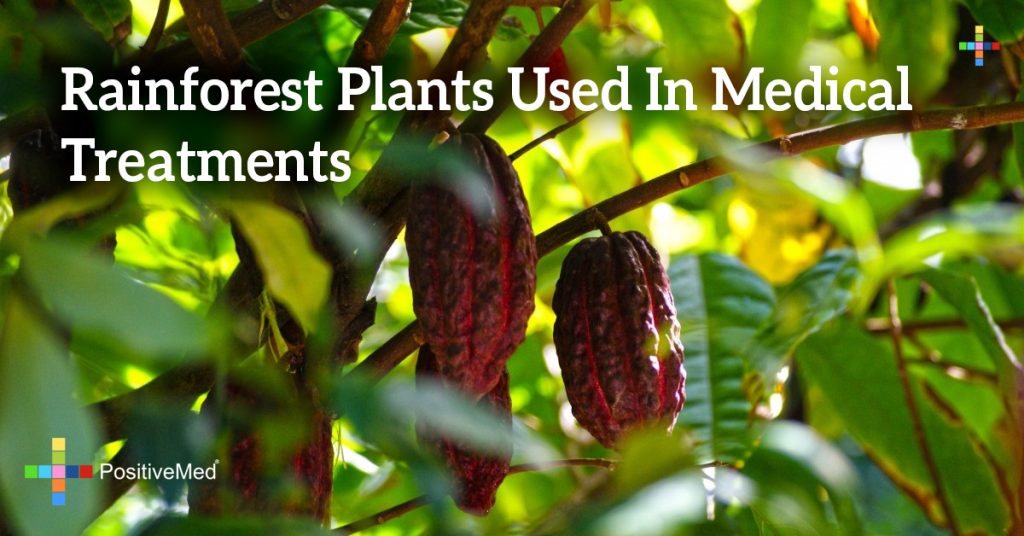 In addition to playing a major role in balancing the global ecosystem, many rain forest plants also have huge medicinal value. Twenty-five percent of all current western medicines are derived from plants found in the rain forest. It is estimated that medical researchers have tested just 1% of the flora and fauna of the rain forests for medically active compounds, but at the current rate of destruction, there will be no rain forests left in just 40 years.

The following are just a few of the many medicinal plants found in the rainforests:

1. Curare
Found in the canopy of the South American forest, curare is a poisonous plant that grows as a large vine. Measuring about four inches at its base, this woody vine is capable of climbing a considerable height of about 30 metres high into the tree canopy.

Traditionally, curare was used by the Indians of South America to make poison for hunting animals in the forests. With its numerous pharmaceutical properties, curare is capable of treating testicular inflammation, enlarged prostate, kidney stones, and fever. Externally, it is used for treating bruises and poisonous snake bites. Due to the fact that its strong muscle-reluctant chemicals cannot be absorbed in the stomach, the roots and oral extracts are generally considered safe for human consumption.

2. Cat’s Claw (Uncaria Tomentoosa)
Cat’s claw is a woody vine found in the Peruvian Amazonian forests and the tropical jungles of Central America. Because of its claw-shaped thorns, it is also called hawk’s claw, sparrowhawk nail, and pot hook. It is thought that this plant may help in the treatment of conditions such as cancer, rheumatoid arthritis, and AIDS, though research is still ongoing and its efficacy has yet to be proven in clinical trials.

3. Cinchona Tree
Cinchona tree, commonly known as quina, is a native to the tropical Andes forests of the western region of South America. It is mainly used to make quinine, one of the most effective and reliable cures of malaria. On top of that, it is used for stimulating appetite and treating stomach problems as well as treating blood disorders such as haemorrhoids, leg cramps, and varicose veins. It is also used in eye lotions to kill bacteria and relieve itching. Some people use it to treat minor ailments such as the common cold, headaches, and mild fever.

Due to its great medicinal value, the cocoa tree stands out as one of the most important rainforest plants. This tropical tree is unique in that it produces more than 155 chemicals that can be extracted from its bark, fruits, seeds, and leaves. The extracts are used to treat coughs, kidney stones, anxiety, fever, and external cuts and bruises.

Cocoa butter, which is obtained from the cocoa tree, is used in fine soaps and skin creams to reduce stretch marks, fight off free radicals, and treat skin conditions such as eczema, acne, and dermatitis.

5. Rosy Periwinkle
Originally found in Madagascar, Rosy Periwinkle was traditionally used for treating diabetes. It is used in the preparation of two of the most effective tools against childhood leukaemia that western medicine has, Vincristine, and Vinblastine. These drugs are responsible for increasing the prospects of surviving childhood leukaemia from just ten percent to around ninety five percent. If one plant highlights the true potential of the rainforests with regards to medical science, that plant is surely Rosy Periwinkle.

6. Ceiba Pentandra
Capable of growing up to an amazing height of about 85 metres, the kapok tree, also called the ceiba tree or the silk cotton tree, is the tallest tree in the Amazon Jungle. The trunk and branches are crowded with several thorns and the palmate leaves comprise of 6 to 10 leaflets, each measuring up to about 20 centimetres long.
There are many species of Kapok tree, and Ceiba Pentandra is just one such species. Ceiba Pentandra bark extracts are used by inhabitants of the Amazon not only as a treatment for headaches, but also to treat type two diabetes.

7. Annatto Tree
The annatto tree, also referred to as achiote or roucou, is a medicinal rainforest tree found in the tropical and subtropical regions of Central America and South America. The oil extract of this tree contains carotenoids, which offer protection against the harmful effects of UV rays. In addition, it serves as a powerful insect repellent and helps reduce blood pressure.

The Pacific bleeding heart is a native to the forests of the Pacific north-west in western North America. It is a herbaceous rhizomatous perennial plant growing to a height of 45 centimetres and a width of 25 centimetres. It has deeply divided grey-green leaves and deep pink flowers.

Tincture, which is extracted from the roots of the Pacific bleeding heart, is used for various purposes such as alleviating anxiety. Externally, it is used to provide relief from sprains and bruises.

Yerba mate is a species of the holly family and is the primary source of the beverage called mate, which is traditionally consumed in subtropical South America, particularly in Bolivia, Paraguay, Brazil, north-eastern Argentina, and Uruguay. The tea is made by steeping the ground stems and leaves of the plant.

Yerba mate contains three xanthines: theophylline, theobromine, and caffeine, which combine to produce stimulant and relaxant effects. Yerba Mate has a stimulating effect on heart tissue, while relaxing the smooth muscle tissue found in blood vessels. It is therefore easy to see why many claim that Yerba Mate supports cardiovascular health.

10. Guarana
Featuring clusters of beautiful flowers, large leaves, and hard fruit, this climbing plant is a native to the Amazon basin. Guarana is widely used in sports energy drinks, it is a natural source of caffeine, and reputed to ease the pain of strained muscles. Guarana also contains Catechin, a natural antioxidant.