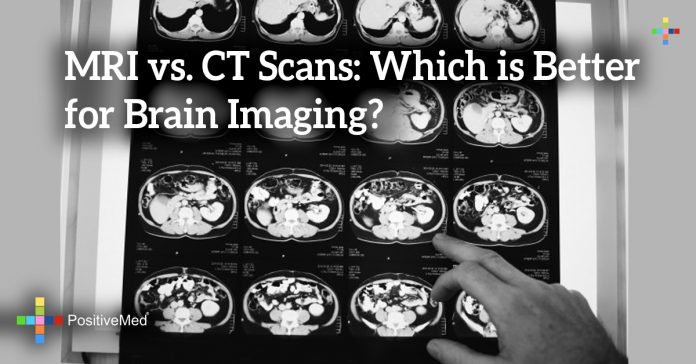 Neuroimaging is a process of obtaining a picture of the brain through magnetic resonance imaging (MRI) or computer tomography (CT) scans. While the two methods appear very similar in their physical dynamics, they actually vary in many ways. Both processes necessitate the patient being placed on his or her back and then inserted into a tube in a large machine. However, the technology behind each of these two machines—and the information provided by each—is quite different.

One of the biggest differences between MRI and CT scans is the duration which a patient must remain inside the machine. Where an MRI takes about 30-45 minutes to complete, a CT scan can typically be performed in less than 10 minutes. This can be a factor for patients whose injuries may require immediate attention, such as a severe intracranial hemorrhage, which could result in death in less time than is required for an MRI to complete.

Additionally, patients who are suffering from confusion due to a recent trauma, or those who suffer from claustrophobia may be less capable of properly remaining still for an MRI.

There are situations when it is beneficial for a neurologist to employ a contrast dye in order to gain a better understanding of a patient’s brain. This can be, among other reasons, for the purpose of highlighting blood vessels in the brain in order to find vascular abnormalities, including aneurysms.

The concern lies in the contrast agents that are used for these procedures. CT scans may use dye containing iodine, which can cause severe (possibly life-threatening) reactions for allergy sufferers. MRI scanners employ a contrast agent called gadolinium, and while allergies to this substance are much rarer, persons with kidney disease are still at risk of a serious reaction known as nephrogenic systemic fibrosis.

Due to the varying technologies involved, each machine excels in detecting certain abnormalities when compared with the other. For example, an MRI is better for detecting very small lesions, such as acoustic neuromas or multiple sclerosis plaques. By comparison, a CT scan would be better for detecting fractures or other bone problems, as well as conditions such as acute hemorrhage.

There are some cases when the radiation levels associated with a CT scan are worrisome. About one in 300 CT scans have the potential to contribute to development of cancer, which is of greater concern for younger patients due to their prolonged potential for future radiation exposure.

By contrast, an MRI does not expose the patient to radiation. These scanners capture images by using a powerful magnet to stimulate atoms within a patient’s body, releasing a type of energy which can be detected and recorded by the machine. For this reason, MRIs pose a greater risk to individuals with metal implanted in their bodies, or pacemakers, for instance.

Which Option is the Best?

There is no absolute better or worse, in terms of MRI versus CT scans. Each has its own merits, practical uses, and limitations. Always discuss allergies and all health concerns with your physician so that they can advise you on whether a neuroimaging process is necessary, and what method may be best for you personally.