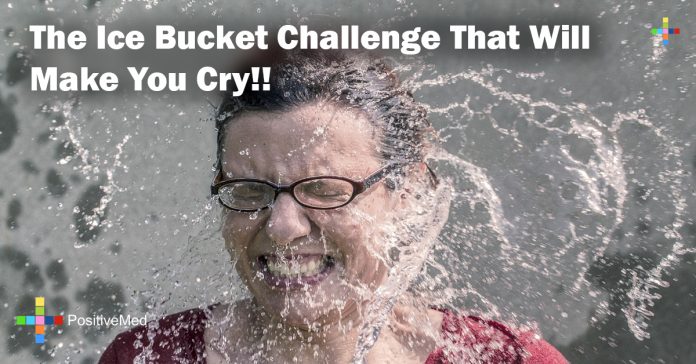 The Ice Bucket Challenge That  Will Make You Cry

I thought I had seen them all, my Facebook wall is filled from top to bottom with Ice Bucket challenges, but this one is like no other one out there!!! This video really touched my heart and made me cry. If there is one video you should/must watch this year it’s definitely this one!!!

Many Celebrities and famous faces around the globe have taken on the Ice Bucket challenge to raise money and awareness for ALS (Amyotrophic Lateral Sclerosis).

ALS is a progressive neurodegenerative disease that affects nerve cells in the brain and the spinal cord. Motor neurons reach from the brain to the spinal cord and from the spinal cord to the muscles throughout the body. The progressive degeneration of the motor neurons in ALS eventually leads to their death. Most often ALS strikes people between the ages of 40 and 70. Only 30,000 people in the United States have ALS, resulting in not much funding for research and no cure has been found to date for this rare disease.

The Ice Bucket challenge has raised more than $13 million, meanwhile medical research has been cut by billions. The NIH (National Institute of Health) is the single largest source of ALS research funding in the world, in 2014 the NIH has seen their funding slashed 5.1 percent, their total budget is now $30.15 billion, down from $31.2 billion in 2010. What we really should be doing is asking our celebrities, billionaires, and friends to start voting out politicians who cut funding for medical research!!!

In hopes of the day that a cure is found for ALS!!!