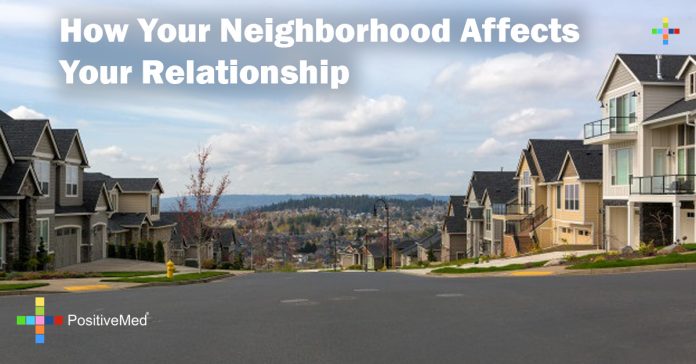 Two terms psychologists use to describe how relationships within neighborhoods are formed are the mere exposure effect, and the propinquity effect. According to the principle of the mere exposure effect, the more often you see someone, the more you’re apt to like them. According to the propinquity effect, the most powerful indicator of whether you will like another person is how often you are in close proximity with them. This means that one important way that your relationships are affected by the neighborhood you live in is that you’re likely to form relationships with people you see and interact with most frequently.

HUD conducted several studies regarding the effects of neighborhoods on social relationships. One of these, the Moving to Opportunity study, utilized a treatment group, a comparison group and a control group. The treatment group received vouchers and assistance in moving to housing in low-poverty neighborhoods. The control group received assistance to remain in housing projects with a high concentration of poverty. After five to seven years, examinations of the two groups revealed that the treatment group experienced better physical and mental mhealth than the control group.

An adverse neighborhood is one which may lack resources that contribute to quality of life, such as sidewalks, playgrounds, and access to nutritious foods and medical care, as well as having poor air or water quality. Recent research has identified that there is a link between living in an adverse neighborhood and several mental health issues that directly affect personal relationships, including stress, anxiety, and depression. These are all issues that can interfere with the ability for form and maintain bonds with other people. Depression also results in less social support and less participation in family life. For these reasons, mental health professionals advise against public housing projects that result in a high concentration of poverty in one neighborhood.

Researchers have conducted studies on both the structural and functional aspects of neighborhoods. The structural aspect consists of information from the U.S. Census regarding the age, income, and level of education of the people who form the neighborhood. The functional aspect focuses on behaviors that are characteristic of the residents of the neighborhood, such as crime rates. Fear of crime has a direct impact on residents’ ability to trust one another and form relationships. People living in neighborhoods in which people are able to trust one another are more likely to cooperate in discouraging inappropriate behavior, thereby preventing it from becoming the social norm within that community. Additionally, those exposed to healthier behaviors are more likely to adopt and maintain those behaviors themselves.