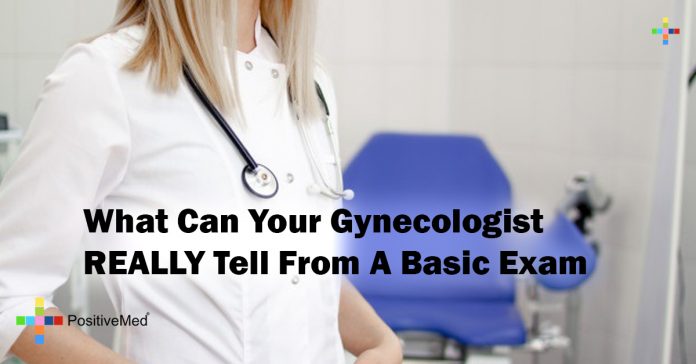 What Can Your Gynecologist REALLY Tell From A Basic Exam

Did you know only 17% of women see their gynecologist for an annual exam? Sure, there are people who say that healthy-seeming women don’t necessarily need a pelvic exam, but there is still value in having a full workup.

They can spot a condition that’s ruining your life.

During a manual exam, gynecologists are sometimes able to detect when muscles have deteriorated or weakened to a point where they may cause incontinence – which happens to be a health issue most people feel uncomfortable talking about.

They can spot what’s ruining your physical love- life.

Most people are hesitant to discuss difficulties in bed. They don’t think it’s important enough to talk to a doctor about or are too embarrassed to speak up. Gynecologists can recognize vaginal dryness due to estrogen fluctuations from the coloration of the tissue, which is typically deep colored and glistening, will appear pale and matte instead.

They can tell when a “yeast infection” is actually something else.

Upwards of 70% of women try to self-treat a yeast infection before contacting their doctor. However, in many cases the yeast infection is another type of vaginal infection, such as bacterial vaginosis, which doesn’t respond to over-the-counter yeast infection medicine. A gynecologist can also tell what’s happening in the vagina by its appearance, as well as the look of the vulva, and can recommend a treatment based on that and the type of discharge.

They can identify serious diseases – rare or common

During a manual exam, the doctor will check the vulva for signs of melanoma and pre-cancerous skin changes, which often don’t present symptoms. When checking out the vagina and cervix and can identify polyps or other growths that can be benign, but may become problematic if they’re not removed.

And before you ask – yes, you should still get an exam, even if you’ve had a hysterectomy. Not having a uterus doesn’t mean you’re suddenly immune from contracting vaginal cancer or other problems that involve the vagina, vulva, or bladder.

They can confirm if you have another, not-as-serious, problem.

There may be some asymptomatic anatomical findings that would be good to know about before they become an issue such as having a low bladder (which, if one has weak pelvic floor muscles, can indicate a bladder prolapse) or an enlarged uterus or ovaries (which can indicate endometriosis or fibroids). A gynecologist will be able to educate you about these conditions and help you make decisions about your health accordingly – if there’s anything to be done at all.

They can’t tell everything.

They can’t tell if you’re currently love- active, how many partners you’ve had, or how many children you have — the vagina and vulva aren’t like marks on a tree and the vagina is super-elastic, it goes back to its regular size pretty quickly.

They also will have to do tests for STDs and other ailments, because the signs aren’t always obvious. Gynecologists can spot inflammation and other clues of a serious STD such as gonorrhea, but the only way to tell for sure is to get a swab of the area or a urine test. This is particularly why it’s a good idea for those who are $e*[email protected] active – or even suspect they may be infected — to get additional lab work done.