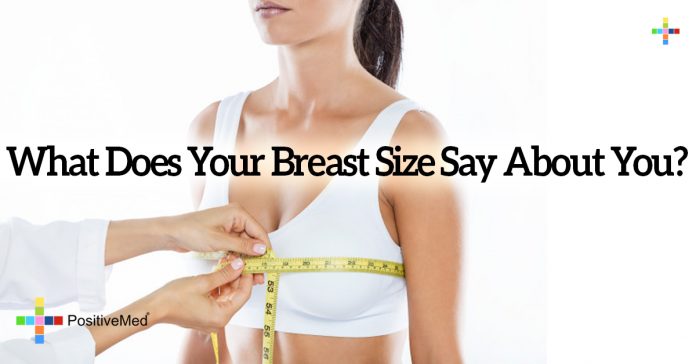 What Does Your Breast Size Say About You?

Breast size is a big deal for men because of its implications regarding the health and nurturing capacity of a potential mate. For women, however, breast size can mean so much more. In fact, recent studies show breast size can have significant influence on female emotional well-being including self-esteem and social functioning.

According to a study by the Huffington Post, American bra size over the past 20 years has increased from 34B to 34DD. The major factors contributing to these increases have been weight gain, appropriate bra size choices, and breast implants. Breast size isn’t just a status symbol, however, it can say so much more about a woman.

Here are four things breast sizes could say about you:

– In a 2007 study posted by the Annals of Plastic Surgery, researchers found that women who chose to undergo breast augmentation were up to three times more likely to commit suicide. Even though an association was indicated it remained unclear if whether previous psychological problems existed that made women with breast augmentation more susceptible to the behavior.

– Studies made by a journal called the Archives of $exual Behavior found that larger breasts implied a higher capacity for bearing and caring for children.

Men are particularly keen on that perception and men who want children instinctively seek out larger breasted women while men who do not want to become fathers tend to be attracted to smaller breasted women.

– Studies conducted by e-commerce giant Alibaba found an association between larger breasts and spending. The research found that women with a cup size of B or smaller tended to spend less than larger breasted women.

– Research published in the journal Plastic and Reconstructive Surgery showed that women with extra-large breasts or mild to severe differences in breast sizes were more likely to have eating disorders or other self-esteem issues.

Breast sizes are very important to women and can significant impacts on personal and psychological levels. Whether indicating behavioral risks, nurturing instincts, spending habits, or low self-esteem, breast size can say a lot about a woman.