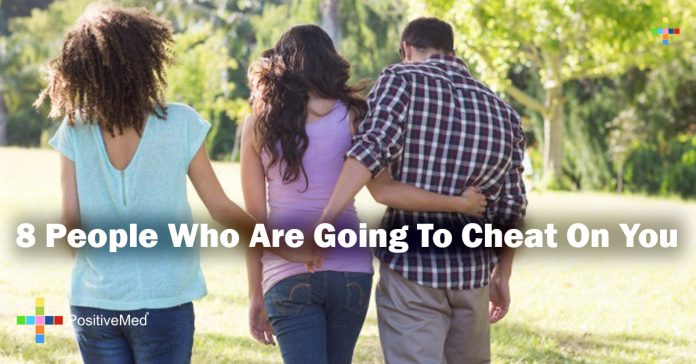 8 People Who Are Going To Cheat On You

Have you been cheated on? Betrayed? Stabbed in the back? Do you want to stop that experience from ever happening again? Science shows that you may be able to tell who the cheaters are just by some of their characteristics! Surveys taken from AshleyMadison.com and various other websites help outline these characteristics.

Although women tend to lean towards taller men, they may want to give the short ones a chance. According to a study done from IllicitEncounter.com, men over 5’10” are twice as likely to cheat on their partner.

This may seem a bit silly, but a study done with a sample of 2,000 women showed that Wayne is the least trustworthy name when it comes to being faithful.

A survey on CheaterVille.com shows that 42% of women who cheat are blonde. That’s a pretty big chunk!

An AshleyMadison.com survey shows that women teachers are more likely to cheat on their husbands. This is definitely not the first profession you’d think of when it comes to cheating!

A survey also done by AshleyMadison.com shows that women who cheat tend to shop more than women who don’t cheat. About 1/3 of women said they started shopping more after they started cheating!

As far as the profession male cheaters seem to have, AshleyMadison.com found that men who work in I.T. are more likely to cheat!

It’s not surprising that social media can affect your romantic relationship, but research from the University of Missouri shows that people who tweet more are also more likely to cheat.

While the French may seem romantic, they are certainly not faithful! A survey done by LELO, 75% of the French admit to cheating!

So while having one or more of these characteristics doesn’t mean a person is going to cheat, according to science, it’s a good idea to be wary!