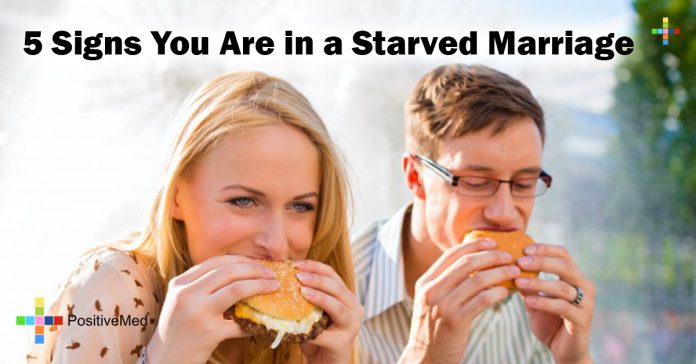 5 Signs You Are in a Starved Marriage

At some point in a marriage, it’s normal for most couples to have sex less often than they did when they were newlyweds. However, when sex becomes a rare or absent occurrence, it can lead to one or both people feeling bitter, angry and deprived. This can lead to serious issues in any relationship. If you’re worried that your marriage is lacking sex, here are some signs to watch out for.

1. Thinking of Other People

Sex is a basic human need. When people don’t get it from their spouse, they just might seek it from someone else. Sometimes, this might be as seemingly innocent as fantasizing about a celebrity or fictional character. However, it’s a dangerous path that can eventually lead to a real-world affair.

Do you and your spouse seem to be fighting more and more ever since the sex dried up? This can be a consequence of unresolved sexual frustration that results in anger and irritability. Naturally, the pent-up stress and sexual energy have to go somewhere, so they get expressed through hostility.

In many animals, sex is used for more than just procreation. It also serves as a means of reinforcing bonds. It’s no different in humans. Sex helps to strengthen and reaffirm emotional attachments between partners. Infrequent sex allows these ties to weaken, and both individuals can become emotionally distant from one another.

If one partner in a marriage feels deprived of sex, yet there are no attempts to remedy the situation, it’s not surprising that resentment crops up. This resentment tends to make itself known during arguments or in the form of gossip, venting or passive-aggressive behavior.

Many people living in a sex-starved marriage report feeling rejected or unloved by their spouse. It’s also common for the sex-deprived individual to wonder if their spouse still finds them attractive. This can wreak havoc on self-esteem levels, which can begin negatively affecting all areas of life.

Sex is an essential part of a healthy marriage. Unfortunately, there are plenty of couples that, for many possible reasons, don’t have sex often enough. If you’re in a sex-starved relationship, it’s important to talk calmly with your spouse or seek guidance from a marriage counselor.